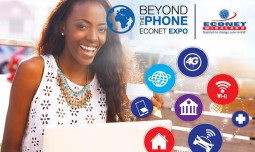 Remember the Econet Experience Expos Econet hosted somewhat irregularly since about 2010? It looks like they will have something similar this year, except this is being called simply the Econet Expo.

The 3 day expo will be held next week from 12 October to 14 at the HICC in Harare. Themed “Beyond the Phone”, a press release we just received says it’s meant to showcase the company’s new range of value-added services that are being introduced as Econet diversifies its revenue and product range. The over-told but still true story of “there’s no money in voice anymore and we have structured our company for it.”

The company CEO, Douglas Mboweni says in the release that despite the traditional revenue inflows declining due to maturity, Econet remains solid and is well positioned for future growth as it focuses on pioneering innovative products under the overlay services cluster to boost revenue, earnings and ensure sustainable business growth.

If you read the news yesterday, you would ofcourse stop to ponder on the stark differences in tone. Yesterday’s Econet had the tone of a company whose fortunes were fine until a regulator artificially hit their bottom line levels so extreme they are firing employees and pressuring the regulator to fix the problem. Today’s Econet is “solid and is well positioned for future growth”.

Ofcourse the two faces don’t need to be mutually exclusive – as they say, it’s not “Or”, it’s “And”. Just found the differences noteworthy.

Anyway, we will likely join you next week at the expo so we can post the new beyond the phone stuff coming out of Msasa.

Here’s a link to the full release.