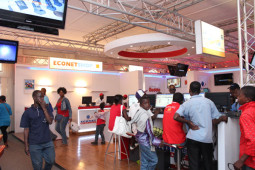 The rough spell being experienced by local telecoms companies hasn’t shown any signs of letting up, with the market leader, Econet Wireless, experiencing its fair set of challenges just like every other operator.

In a statement released by Econet, the company has announced that it has issued retrenchment notices to 100 employees, with a need to adjust to the decline in revenue referenced as the reason behind this move.

Douglas Mboweni, Econet’s CEO, pointed out that the company’s depressed revenues had been created by a POTRAZ regulatory directive, which Econet is still contesting in court.

This is a reference to the telecoms industry regulator’s instruction passed last year to all telecoms operators to reduce their voice tariffs by 35%. The directive came into effect on the 1st of January this year and according to Econet Wireless’ annual financial report it contributed significantly to its lukewarm results which were highlighted by a 41% drop in profit.

Econet has previously spoken out against POTRAZ for moves such as the tariff adjustment, going so far as to accuse the regulator of destabilising the telecoms industry.

Other challenges plaguing Econet that POTRAZ has influence over include the failure to enforce the payment of interconnection fees which have prejudiced Econet of $26 million from the other operators.

According to Econet, in retrenching these 100 employees the company has fully complied with labour laws regarding this approach.

In related cases of local corporate staff adjustment, the compliance with labour laws was made easier for Zimbabwean employers this year following a Supreme Court ruling in July which allowed for the termination of employment contracts on three months notice.

A large number of local companies took advantage of this Supreme Court ruling to streamline human resources costs, including other telecoms operators like Telecel. Econet, however, claimed that its own spate of job dismissals at the time were not part of a cost-cutting strategy.

At the time, Econet had terminated the employment contracts of 47 people and as part of a cost rationalising effort, its subsidiary, Steward Bank terminated contracts of 39 employees this year. This brings it to a total of 147 jobs shed by Econet, plus an additional 39 for Seward Bank.

Econet has stated that it will award shares to staff who accept the retrenchment offer. According to Mboweni,

The retrenchments become the latest in a series of measures being taken by Econet to maintain operational efficiency and adapt to the tough environment. So far the mobile operator has asked its suppliers to reduce their prices by 15% and it has reduced staff salaries by 20%.

For Econet, which has proudly highlighted its impact in local job creation referencing 60,000 jobs created by the operator and all its subsidiaries, actions like retrenchments and employment contract terminations are a hard pill to swallow.