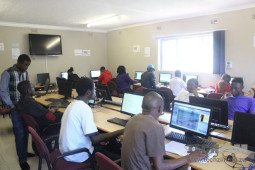 Part of the team of Muzinda Hub developers

As most people now know, thanks in part to the strong publicity created by its parent company, Econet Wireless, Muzinda Hub has been training 1,000 young Zimbabweans in software development and core entrepreneurship skills.

To celebrate the end of the training for these aspiring tech entrepreneurs, there will be a graduation ceremony at the end of October. But that’s not all. Muzinda Hub will also be using the event to launch a new online jobs platform.

This job centre is meant to provide anyone searching for Zimbabwean tech skills, particularly software development talent, with an online platform where the right skills can be sourced. It’s going to be providing access to the developers that Muzinda has prepared over the past 12 months, and follows the promotion that Muzinda has already been conducting for these developers.

The platform is web based and it allows a client looking for a programmer or a software solution to create an account on the platform, request for a developer or specify a job they need done for them, after which they will be sent a quote from the developers working on it. Once the job commences they get real time updates on the progress. At the same time it notifies the developers of jobs available.

This platforms comes at a time when Econet is also preparing to launch an on-demand jobs and service platform called Technites, which extends to both skilled and non-skilled work.

According to Tendai Mashingaidze, the team lead at Muzinda, all this is meant to dovetail with the vision for job creation and entrepreneurial promise both of which have been articulated by Econet Wireless and Strive Masiyiwa, its founder.

If the platform manages to scale effectively, providing a skills base made up of Zimbabwean talent, it will be the first local case of a skills centre that is exporting services, an idea that has been debated at length as a solution for Zimbabwean unemployment, particularly through services like call centres.

Thanks to the internet, the advantages of such centres include the ability to access markets around the world. Examples of similar platforms include the very popular Fiverr.

While Muzinda Hub is leaning on the Econet badge to help create visibility for this jobs platform, its success will largely be determined by how well the team of developers executes on the work presented to them. As is the case with e-lancer platforms and everything else on the internet, competition comes in the form of anyone who has internet access and cares to go up against you.