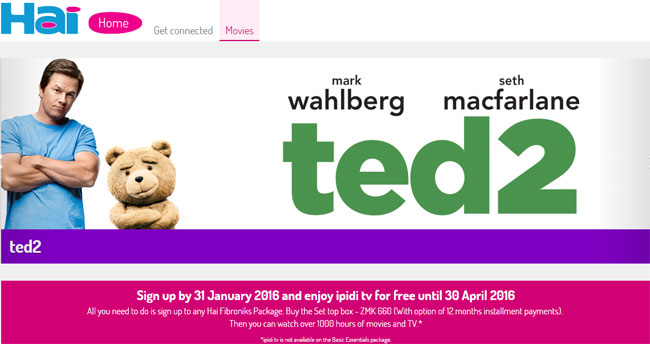 In the latest development in African online TV and Video on Demand Services, ipidi tv, the Video On Demand Service from Liquid Telecom which has been in the works since 2013 is now available in Zambia.

According to its website, people using Hai Zambia Fibre internet (Hai Fibroniks) can access ipidi tv and a promotion has been launched offering free ipidi TV from now until the 30th of April 2016 to every Hai customer who signs up for ipidi tv by the 31st January 2016.

This promo looks like it’s meant to get as many Fibroniks users onto the VOD service while also steering some customers of the basic package (which doesn’t support ipidi tv) onto the higher priced, uncapped packages.

On signing up, subscribers need to buy an ipidi set top box for 660 Kwacha (which is about US$60) and this decoder can be bought on a 12-month installation plan. It’s not yet clear how much the service will cost after April 2016.

Hai Zambia is an internet service provider which was acquired by CEC Liquid Telecom last year. The option to launch ipidi through Hai dovetails with the plans Liquid Telecom has been making to promote the value proposition of its Fibre service through over the top services like VOD content.

This distribution of OTT Services through retail internet providers is likely to be the same approach that will be used by Liquid Telecom for the Zimbabwean market when ipidi launches here. Liquid Telecom already has the same Fibre to the Home distribution service (ZOL Fibroniks) through ZOL Zimbabwe which it also brought into its fold through an acquisition in 2012.

The launch of ipidi tv, which is a realisation of plans by Liquid Telecom, an Econet Wireless Group subsidiary, comes after Econet Wireless’ founder and chairman Strive Masiyiwa, announced the launch of another IP TV service from Econet called Kwesé TV.

The Kwesé TV service which has been scheduled for a 2016 launch will rely on telecoms infrastructure from Liquid Telecom and Econet to provide multi-screen viewing in several African markets.

Both Liquid Telecom and Econet Wireless haven’t confirmed whether ipidi TV, which is set to be white labelled in other countries will be operating as Kwesé TV or it will be a separate service meant to extend Econet’s foothold in OTT services.