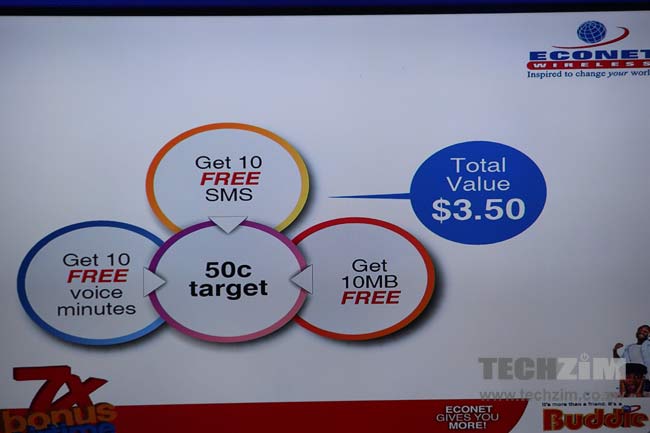 The increasing economic pressures bearing down on Zimbabweans have had a significant impact on consumption patterns and this has forced every service provider to think of ways of encouraging demand.

It’s something that local mobile network operators have also been adapting to with their own service iterations and a battery of promotions.

Earlier today we attended the launch of one such service tweak, Econet’s 7X Bonus Airtime promotion which is a rewards campaign for all Buddie subscribers.

Touted by Econet as the most generous in the market, it’s the latest strategy from the operator clearly designed to trigger a spike in airtime usage.

The promotion offers subscribers rewards in the form of bonus voice, SMS and data. It is already active and can be accessed on the *143# Menu.

For the next 90 days, Econet’s prepaid subscribers will benefit from a daily airtime bonus allowance worth 7 times the airtime they use up. To qualify, each subscriber has to spend a minimum amount of airtime that is set by Econet as a daily target which is customised to each subscriber’s airtime usage patterns.

Once the subscriber has met the daily target they will receive the bonus which is worth 7 times the target amount. So for example a target of $1 earns a subscriber $7 worth of bonuses. The bonus is split into voice, SMS and data rewards which add up to the value of the bonus earned. The bonus is valid until midnight.

Econet is offering 7 times worth of bonuses to its subscribers. Like every other freebie and reward from operators in a harsh environment, it’s a positive and welcome development.

However, this promo has some technicalities that put a damper on the whole “seven-fold worth of rewards” idea. The fact that Econet apportions the bonus across voice, SMS and data rather than letting you decide what you want to do with it is a bit disappointing.

I hardly use SMS and voice calls are not a priority in a world where instant messaging and VoIP are the most convenient alternatives. It’s something that every other broadband subscriber who uses OTT services as communication substitutes will also attest to.

Then there’s the limited window period which doesn’t seem like a big deal for small targets, but is an issue when you receive $14 worth of bonuses spread across texts you don’t need to use because you already IM everyone in your circle, and voice minutes (for on-net numbers only by the way) that you can’t use up before midnight.

Hopefully, these are the things that will be changed as feedback is gathered, something that Econet has promised to do during the promotion’s 90-day run.

Here are some images from the launch