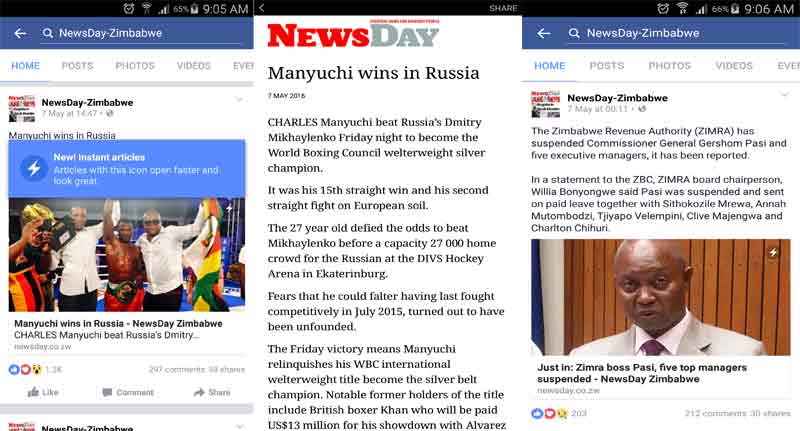 If you are a Facebook user who enjoys the convenience of news updates delivered to your timeline and you regularly click on them, you’ve probably noticed by now how some news publications have enabled the Instant Articles feature.

News stories that have activated this feature have an icon that looks like a lightning bolt in the top right corner. Instant Articles are designed to load faster than ordinary links which direct back to a publisher’s website. As such this provides a reader with easier retrieval of a news article.

The feature was introduced by Facebook in 2015 and at the time was restricted to a limited number of publishers before being opened up to all publishers around the world in April this year at the Facebook F8 Conference.

Less than a week ago, Newsday, one of Zimbabwe’s leading daily publications started using the feature.

This national daily which is owned by Alpha Media Holdings becomes the first major Zimbabwean publication to use Instant Articles ahead of its rivals like the ZSE listed Zimpapers and Associated Newspapers of Zimbabwe (ANZ).

Alpha Media hasn’t placed the content from all its publications on Instant Articles, though. It’s other publications, namely The Standard, and The Zimbabwe Independent haven’t enabled Instant Articles for their content which suggests that the media group is approaching the alternative gingerly before plunging its entire stable into a new type of content delivery.

It’s also the same caution that probably explains why the feature hasn’t yet been embraced by other publications in Zimbabwe and across Africa.

These publications are grappling with some realities that this new feature presents such as a modification of advertising revenue dynamics and the loss of certain features on an article that come with access to the platform like supporting links and tabs.

However, all these issues are likely to be overlooked in the medium to long term as Facebook’s dominance continues to grow in every discussion on internet access and content distribution through social media.

Beyond its immediate benefits which include a faster access to content, an uncluttered look on articles as well as the managed use of data which is saved by not having to load pages off Facebook, Instant Articles complement Facebook’s transformation into an important stopover for anyone accessing the internet.

Users of Facebook (there are over 1,5 billion globally and over 120 million in Africa) and all its related applications like Messenger, WhatsApp and Messenger are increasingly being drawn into an all-encompassing ecosystem which is being designed to offer a “complete internet solution”.

It’s something that raises a lot of concerns on its own and kicks up the never ending debate around net neutrality violations.

In countries like Zimbabwe where this is amplified by other market-related features like Facebook and WhatsApp bundles, early adopters like Newsday are merely choosing to view this reality positively and are tapping into its opportunity before everyone else.

As long as dynamics around broadband access and internet preferences remain the same Newsday will likely be joined by other publications very soon.