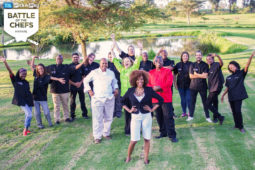 Zimbabwean reality TV cooking show, Battle of the Chefs, has raised US $150,000 from private equity investors enabling it to create what is certainly one of the best TV productions in the country. Founder of Battle of the Chefs, Joseph Bunga told us recently that they had secured the funding in recent months and have since produced the second season of the show.

The show is currently screenly weekly on ZBC but you can also watch it on YouTube here. The concept of Battle of the Chefs is similar to MasterChef or South Africa’s Ultimate Braai Master – revenues are based on an advertising model.

Before the funding, Bunga says they bootstrapped their way to producing the first season, were running out of money by the time they finished production. The first season also aired on ZBC TV last year. That first season had some 13 episodes. After it started airing they got an offer from Multichoice to have Battle of the Chefs screen on the Zambezi Magic regional pay TV channel but he says they had to turn it down because the offer was too low.

Here are some pictures from the 2015 season:

While Season 1 was good – when we saw it we were pretty impressed – Season 2 is just on another level. After the funding, Bunga says they worked on improving the quality of the show. And thanks to the traction proven in the first season, they we able to attract some of the biggest brands in the region like Pick n Pay to sponsor the second season.

They also bought cameras and other equipment and they moved shooting to a quieter and bigger location in Harare. Bunga says about being to do these things: “We couldn’t have done it without the money. We were so close to folding up after season 1, because of the lack of capital. It boils down to capacity, If you don’t have the capital you cannot procure the right equipment, hire talent and other things. In the first season, I had to wear 10 hats at a time”.

Here are some photos from their new studio and the second season:

Over the next 12 months, Bunga says, they are preparing to have Battle of Chefs cover 4 countries in the region – Zambia, Zimbabwe, Botswana and Namibia – with shooting being done at the Victoria Falls. They have also began looking for partners for the expansion of the show to Accra in Ghana and Nairobi in Kenya over the same period.

To make that happen he says the have to set up distribution agreements for the show with African broadcasters, and attending events like Discop helps. Bunga says they want to raise about $400k in the coming months and are looking to grow their revenue to about $1.2 Million a season.