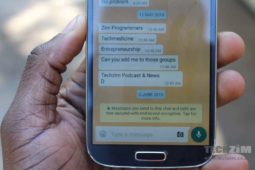 This has started discussions on whether or not the regulator has the capacity to monitor all social media and messaging platforms like WhatsApp.

While POTRAZ and the law enforcement agencies working on this are likely to have their own methods for identifying social media abusers, the remote monitoring of WhatsApp messages isn’t one of them.

Three months ago, WhatsApp introduced End to End encryption (E2EE), a feature which secures all types of messages sent on the platform with a digital lock  – meaning that only the sender and the receiver can open them.

Nobody else, including your internet service provider or your mobile network and even the team at WhatsApp, can access these messages.

Every WhatsApp user with a recent version of the app has the encryption feature, which also works for group messages and doesn’t need any special feature to enable it.

WhatsApp also made it easy for you to know whether the person you are communicating with has a version that’s E2EE enabled, via a notification specifically for that.

To be fair, though, As much as WhatsApp has added this type of technology to protect your privacy, it can only do this to a certain extent.

Your messages are only as private as the person or people you chat with. This reality of message privacy might inform how POTRAZ will identify social media abusers, but whatever the case, you can be sure that it won’t be via some unauthorised third party WhatsApp access.

15 thoughts on “Just to be clear, your WhatsApp messages can’t be viewed by third parties”