My calling and texting habits is something I rarely put into perspective, more often I am more interested in the topic of discussion and quality of conversation than the medium I used to create the two-way communication channel.

According to POTRAZ, 1 in 3 things we utilize our mobile internet on is the Whatsapp service, this is probably due to the abundance of text and media shared on chats. The remaining usage is perhaps spent on browsing, Facebook, Twitter, background process, updates and secrets only you can tell.

However, a recent poll we initiated on Twitter put things into greater perspective. 7 in 10 people use Voice Calls over WhatsApp. This revelation went against what i had initially expected. 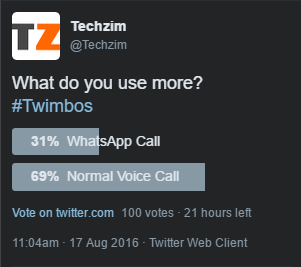 I thought Whatsapp Call had reached a point where people would use it as a first line of communication. I generally tend to use Whatsapp Call more often that I use Voice. This may be due to me being in a Wifi environment both at home and at work as suggested by one of our poll participants.

When on wifi or on LTE, whatsapp call is as clear as voice calls. Most people who enjoy the benefits of Whatsapp Call are either on wifi and speaking to someone on wifi or have mobile data with a phone on LTE. Other users who use Whatsapp Bundles seem to not enjoy the experience as calls either have poor connection or go through re-connection phases.

Also of concern to the poll participants was the reliability of Whatsapp Call. Not only do you as the caller have to have either data or bundles, but the recipient of the call should be online too. This creates issues especially when calling friends and relatives in remote areas, or at odd hours when they don’t have access to airtime.

Although the poll went against what i initially i expected, there are some factors that I now understand to be hindering the adoption of not only Whatsapp calling but phone calls over the internet (Skype, Facebook call, Imo or Viber).

There are still issues concerning calling culture in Zimbabwe, we tend to view Whatsapp as an informal and social communication platform whereas Voice Call is for more serious issues. Sometimes when I get a voice call I pause and wonder who it might be.

Also, Whatsapp tends to be viewed as more personal, the fact that it has a profile picture and status makes it more of a communication tool for people who really know each other. Some may find it awkward to have a blown up profile picture of their boss on holiday with a status toasting their life on a voice call. 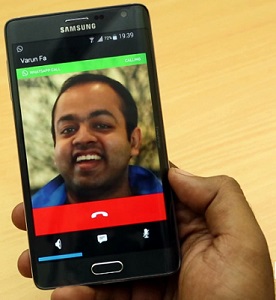 All is not lost for Whatsapp call and Internet based calls, recently POTRAZ released statistics on Mobile Internet Access Provider’s Outgoing and Incoming traffic, they were the only two mobile traffic statistics to record gains by 23,8% and 42,2% respectively. While inbound and outbound voice traffic recorded losses.

This information shows that although voice calls are still dominant mode of communication, internet based calling is making strides towards being a competitive force.

There is need for Network Operators to provide better quality networks, coverage and data costs to effectively see the adoption of internet calling, a move they may be hesitant on making even though their Voice Traffic is  witnessing traffic losses.