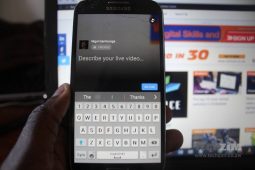 By now everybody who watches videos on Facebook has already checked out the Facebook Live feature that allows to livestream from their accounts.

It was first launched in the USA before Facebook opened it up to several other countries. Locally the feature could only be accessed from a Facebook page and not individual Facebook accounts.

Now, it’s open to every Facebook user in Zimbabwe. We came across it following an update to the Facebook for Android app and we expect it to be open to Apple users seeing that Facebook always rolls out its latest feature updates to iOS as well.

To access the service, you just tap the Live icon located on your News Feed or timeline.

This is a major development for all Zimbabweans interested in sharing live moments with their friends and broadcasting to specific groups or people following specific events.

Anyone can now live stream from their account, literally accessing broadcast services (which used to be privileged) to everyone with a smartphone, a Facebook account and an internet connection that’s good enough to go live.

The fact that this feature is open on Facebook which is the second largest driver of broadband use in Zimbabwe and one of the most popular sites also means that a lot more people will have an opportunity to try out live video.

Users can effectively target broadcasts to specific groups of people without going through the hoops that are associated with regulations around broadcasting.

One thought on “Facebook Live now available to all Zimbabweans, opens up opportunities of citizen broadcasting”