The top 5 brands were: 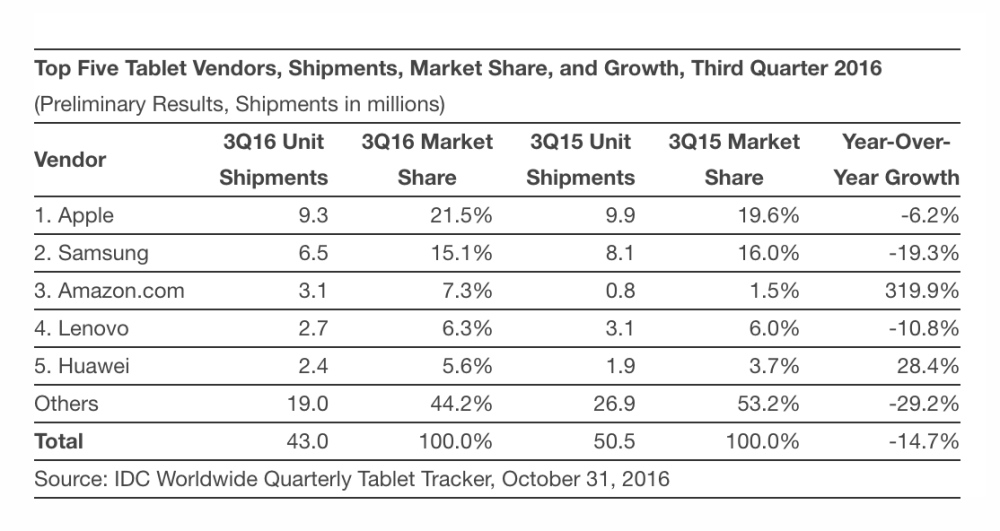 The IDC, which is responsible for providing market intelligence, advisory services, and events for the information technology, telecommunications, and consumer technology markets, offered the following vendor highlights:

Apple’s marketing push for the iPad Pro, the iPad Air and Mini lines have been the models with mass appeal, accounting for more than two-thirds of its shipments this quarter.

Samsung continued to hold the number 2 position. Fortunately, the negative press from the Note 7 did not bleed over into its tablet business. Samsung’s attempt to enter the detachable market with its TabPro S at the beginning of 2016 seems to have taken a backseat as its price and positioning remain uncompetitive.

Amazon Prime Day sale in early July led to a huge surge in shipments of its Fire tablets. The already low-priced device was offered at a 30% discount then, and continued to remain popular throughout the rest of the quarter. The new Fire HD 8 released in early October will likely perform well in the holiday quarter as it follows Amazon’s strategy of selling low-cost tablets as a gateway and companion to its ecosystem.

Lenovo continued to maintain its stronghold in Asia/Pacific (excluding Japan) as well as Europe, Middle East and Africa (EMEA). Though the company has many aspirational products across all its entire consumer electronics portfolio, none were enough to raise the company’s profile in the tablet market, resulting in a 10.8% decline this quarter. While the latest Yoga Book announced at IFA garnered some praise, it is important to note that IDC will be counting this as a traditional PC.

Huawei’s strong presence in the adjacent smartphone market and overall brand recognition has cascaded into the tablet market. The vendor offers a very strong value proposition as many of its tablets (over two-thirds) come integrated with cellular connectivity while maintaining a similar price to rivals who only offer WiFi-enabled devices. Huawei’s presence in Asian, European, and Middle Eastern & African markets remains strong.

The decline in tablet appeal may be attributed to the resurgence of smartphones and introduction of phablets (smartphones with large displays) in the last couple of years.Once hailed as the laptop killer tablets are slowly starting to lose their place in the consumer market as most people would rather have a laptop+smartphone combination to cater for their mobility and productivity. Both devices are now more than capable in providing for consumers entertainment needs so where does a tablet fit in?

Once hailed as the laptop killer tablets are slowly starting to lose their place in the consumer market as most people would rather have a laptop+smartphone combination to cater for their mobility and productivity. Both devices are now more than capable of providing for entertainment needs so where does a tablet fit in?

We have noticed many adverts where manufacturers are trying to sell the tablet with more laptop-like features promoting the add-on keyboard as a standout feature in an attempt to re-define the computer.

The tablet device will always have its place in various industries but the hype around them has pretty much died down, laptops have got thinner and smartphones smarter, tuff competition for a device still trying to find its own identity.