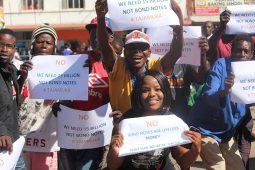 Local activist Advocate Fadzayi Mahere, popular for her stance against the introduction of Bond Notes, has released a public statement via her official Facebook Page and Twitter Account announcing her intention to drive a class action lawsuit against Zimbabwean Banks.

In her statement, the Advocate intends to challenge the following issues:

According to Advocate Mahere, the team of lawyers will initially target CABS, StanChart and Stanbic where they currently have a pool of unhappy clients willing to join the class action.

The Advocate also asserted that their initial request to engage with the Bankers Association of Zimbabwe had gone unanswered hence the move to sue the Banks themselves.

What is a Class Action Lawsuit?

According to TechLaw Journal, a class action lawsuit allows lawyers to vindicate the rights of a large group of people where no individual party has sufficient economic incentive to bring suit on his own. And hence, some class action suits have performed valuable social functions.

Has there ever been a class action in Zimbabwe?

So yes it is possible to institute a class action lawsuit in Zimbabwe.