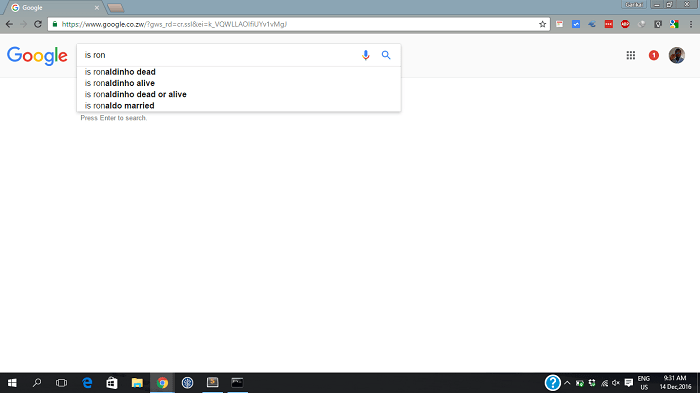 Depending on how you use them Google and the internet can be your friend or foe.

The American Baseball legend Yogi Berra once said,” I really didn’t say everything I said.” This was just a flowery way to prove the point that as a celebrity sometimes people falsely try to attribute their own quotes to you in order to gain mileage.

My colleague has already written about the problem of fake news. It is important to note that falsehoods are not limited to social media and instant messaging platforms. They are seemingly everywhere including ‘authority sites’ such as The Wikipedia itself, where edit wars on hot trending issues such as Donald Trump and the Palestinian-Israeli conflict are quite common.The world is full of gullible people who will believe anything.

The TLDR version of this article is, when it comes to information on the internet do not trust until you verify.

The fake news and fake information problem in Zimbabwe

While Americans are reeling from a whirlwind election that may or may not have been influenced by fake news. Zimbabwe has a fake information problem of its own. Drawn by the lure of ad-revenue there has arisen a coterie of sleazy blogs that specialise in sensational material such as exposés, personal scandals, gory deaths, sleazy pictures etc in a bid to drive traffic to their sites.

While these tend to target celebrities for example with fake sex tapes, misleading headlines and other clickbait, ordinary citizens are not spared. The problem is compounded by the belief that Google knows everything. Zimbabweans have joined the internet boom with enthusiasm and Googling has verb equivalents in most vernacular languages now.

During our weekly European football arguments with my friends “Let’s Google it “ is a phrase that is often used to try to settle the disagreement. Often in their biased frenzy my colleagues end up entering keywords that are designed to serve up to their confirmation bias. In the ensuing shouting contest the rejoinder ‘but it is on Google” is often heard in the drowning cacophony of voices.

I have heard internet lies repeated in church during the Sunday afternoon sermon! For the record scientists know how bumblebees fly and no, they don’t defy the laws of physics.

Purposely or by accident people seem to forget that Google by itself is supposed to be agnostic. The old computing mantra “Garbage in garbage out” aptly sums it up. Google is a faithful servant that only serves you with what you requested. It does not care whether it’s true or false. Just because it’s on the internet does not mean it’s true. You, and you alone, has to verify it.

If there is anything I learnt in my Information Literacy Skills lectures as a first-year college student, it is that verifying information is more of an art than a science. There is no magic formula and once in a while, even the most vigilant are fooled. The following steps, however, will spare you the pain of being duped.

1. It’s all about the source

Anyone can make claims, some of which are hard to verify. Some facts claims/assertions are damn near impossible to disprove. Just because it is plausible does not mean it’s true. Consider the following:

Tar and nicotine in cigarettes cause cancer.

Both sound plausible, some even think of them as common sense but both are false. Before you trust information, consider the source. Widely referenced sources such as the BBC, CNN, New York Times etc should take precedence over some random blog. A treatise by a professor of Economics should carry more weight over the ravings of a doomsday economist with a high school certificate.

Ever heard of the quote: You can fool all the people some of the time, and some of the people all the time, but you cannot fool all the people all the time? Whenever you come across a sensitive piece of information you would do well to seek corroboration and preferably from reputable sources. While almost everybody can be fooled by well-crafted lies, corroboration will make sure that such a deception is unlikely to last. The Satoshi Nakamoto saga is a perfect example, most publications were initially fooled by Craig Wright, even the big guns, but that did not last.

You can use Google to play the devil’s advocate on your behalf. For example, upon receiving the report that the beloved Real Madrid star Christiano Ronald has died in a car crash you can use keywords such as “fake Ronaldo death news” etc to sound the veracity of such news.

There are various tools on the internet that you can use to check whether a story, picture or video is true. Snopes.com is an old time favourite. Most respected international publications also have some form of truth check page.

I did not lead with this because with the increasing sophistication of computers evidence can be easily faked. However, the presented evidence itself can help you decide whether the information presented is true or false. Most false claims for example of a sick child needing urgent attention somewhere are usually backed by re-purposed pictures and media that has been used in previous hoaxes. So ask yourself, have I seen this before? There is a good chance you have seen it elsewhere.

6.Where did this happen?

Hoaxers are pretty smart they will claim that the event took place in some remote growth point you have never even heard of. “Woman gives birth to a goat in Chemhanza village.” This makes it hard for you to verify such a claim and with a little Photoshop magic we can even produce this errr human-goat. My default setting if something preposterous happened in some godforsaken village then it did not happen.

Logic is your friend. “Man turns into monkey after stealing maize” is not logical and if you let your imagination take flight then you too will be fooled. If it defies logic then in all certainty it is false. Such spurious claims never withstand scrutiny.

Closely related to the source step above. Would you believe some guy you have never heard of if they were to ask you to borrow/hire your car for a trip to South Africa? Would you gladly hand over the keys? Why then should you hand your mind over to them?

The lazy idiots who “curate” news for most popular blogs in Zimbabweans, I will not name them, just copy and paste stories verbatim, usually without proper attribution. All they want  are flashy headlines, clicks and ad revenue. Deliberately false information from sites such as TheOnion is from then on propagated as truth instead of comic relief.

There other things you can do but vigilance is key to making sure the information you are getting from the internet is timely, accurate, up to date, authoritative and relevant.

One thought on “Is is true or it’s fake news? How Google can be your friend or enemy”