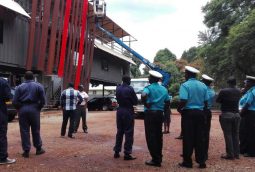 Harare municipal police at Moto Republik this morning just before they started taking the hub’s structure down. Credit Privilege Musvanhiri‏.

Update: Moto Republik has released a statement on the demolition attempt. You can read it here.

Harare City Council attempted this morning to demolish one of Zimbabwe’s most prominent tech hubs in Zimbabwe, Moto Republik. The council said it was because it is an ‘illegal structure’.

Moto Republik is a tech and arts co-working spaces in Harare. a number of local tech and media initiatives use it as an office, amoung them Bustop TV, Magamba Network, TV Yangu and Open Parly.

The co-working space has also been the venue of various tech events including WordPress meetups, the ComExposed comic conference, and is set to be the venue for the africa wide tech challenge Demo Africa.

Journalist, Priviledge Musvanhiri posted a picture and video of the Harare Municipality at Moto Republik today, just before they started taking it down.

Though we don’t have any information on this this claim by the city council that Moto Republik is an illegal structure, it is certainly strange that they are only realising it now after the hub has been operating for years. The suspicion that arises therefore is that this may be happening because Magamba Network, who set up the hub, have ruffled some feathers with their activist content they regularly post to social media. Just week ago they did a video with the famous Pastor Evan Mawarire.

This is a developing story and we’ll be adding information/ making clarifications as we get more information.

Update: We have received more information. The demolition was called of by the Mayor of Harare. You can read more in this article.

Update: We have received information that Moto Republik have been given a week to take the building down voluntarily. The detail on this link.

3 thoughts on “Breaking: City of Harare attempts to demolish Moto Republik, a tech & arts hub in Harare, because it’s an ‘illegal structure’”