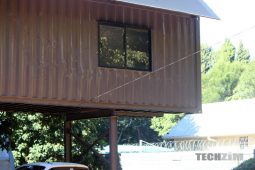 In the latest update in regards to the #SaveMotoRepublik campaign, the City of Harare and the creative hub have managed to reach a compromise that will allow the structure in question to remain standing, while Moto Republik works on adding “modifications to its structures in order for them to resonate with Council bylaws.

The hub have been given a 6 month reprieve in an out of court settlement.

The two week debacle saw the Council initially attempting to demolish and take down the shipping containers, an online petition that was started and a visit from the Minister of Local Government, Public Works and National Housing, Saviour Kasukuwere. Pulling out all stops Moto Republik took their case to the courts as well as opened their doors to the public so that people could ‘experience it’.

15,000 tweets and 1,800 signatures later, engagement with Council it looks like sanity has prevailed.

You can read the full press release below:

We are pleased to announce that the Management at Moto Republik and the Harare City Council and have reached a common ground resolution that will see the modern architectural design at Southern Africa’s first creative hub remain standing. The amicable agreement was made out of court and as part of the resolutions Moto Republik management will work with the Harare City council for the coming 6 months. Last year Moto Republik paid regularization fees and has council-approved plans but in the out-of-court meetings council expressed that shipping containers are a technology that they have not yet fully adopted. Thus Council would like Moto Republik to add modifications to its structures in order for them to resonate with Council bylaws. This 6 month long process will see our technicians and architects coming together with Council engineers to come up with a workable solution that ensures that the structures remain but can exist within the framework of current governing bylaws.

After over 15,000 tweets and over 1,800 signatures on our Change.org petition from the Moto Republik community the young people of this country saved the creative hub from destruction. “We are inspired by the thousands of young Zimbabweans who spoke up, stood up and added their voice to our #SaveMotoRepublik campaign,” says Moto Republik co-founder Comrade Fatso, “You are the ones who saved Moto Republik!” Your contribution to our petition and engagement with elected officials online and offline has resulted in the reversal of the decision by our city elders and a collaborative effort is now the task at hand. There is no doubt in our minds that our Moto Republik community online used social media effectively to not only mobilize local support but as a way to express their concerns and to demand accountability from their elected officials

We are grateful to the Minister of Local Government Hon Saviour Kasukuwere for responding to your call and visiting Moto Republik, this is a reflection of the positive engagement social media can have. We appreciate the work and effort done by The Mayor of Harare Hon Ben Manyenyeni who despite being on leave gave the matter the urgency and priority required by arriving on the scene on the demolition day 10 minutes after he got the call and for demonstrating progressive leadership by promoting dialogue between the young people of Harare and the City Elders.

As Moto Republik we remain committed to our mission to create spaces and opportunities for young Zimbabweans. We are strengthened by your support, encouraged by your energy and we want you to know that we are still standing because of you! #WeSavedMotoRepublik