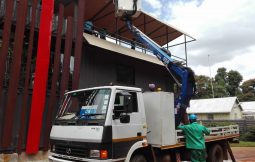 We’ve just received information that the Mayor of the City of Harare, Bernard Manyenyeni, called off the demolition  of Moto Republik.

As reported earlier, police from the City of Harare had come to the tech and arts hub to demolish it apparently because it is an illegal structure. The demolition was clearly starting as shown in one of the pictures posted on social media (see above) was called off and the structure is still standing.

Management at Moto Republik who have contacted Techzim said:

Council officials just showed up without any paperwork and started taking down parts of the building. The team called the Mayor who called it off.

Moto Republik management is now consulting with their lawyers.