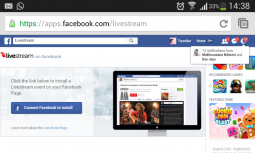 Though I will say this grudgingly, but thank you Olinda for ‘introducing’ us to Facebook live. Despite facebook live having been introduced to Zimbabwe around August last year, most people didn’t really know about it or at least didn’t really consider it until … ummm Olinda. Not that no-one in Zim had ever used it before, but the  Olinda – Stunner saga really got us into the Facebook live mojo as it managed to keep us hooked and somehow even feel much more confident to record our own Facebook live videos.

Not only did most of us only learn then that there is a Facebook live out there, but we learnt that we didn’t need to look or be perfect before the camera even if we were making the video for the public! The reason being, despite Olinda’s imperfect videos, she still got a viewership of more than 75k for some videos. Initially, a few if at all, had the guts of selecting the camera option over the gallery option when uploading a profile picture – and that was on WhatsApp where only your friends had access to the picture; how much more a video on facebook for that matter???

I personally didn’t like the drama Olinda kept spewing but I have to admit her significance in making Facebook live popular in Zimbabwe. She made the whole idea look cool as she constantly interacted with her viewers through the comments during the live video. She didn’t have a script to stick to, so she could easily go back and forth the viewers’ comments which in turn gave Facebook live an interesting spark since her viewers could have their comments responded to in real time.

With all that being said, we realise that facebook live is gaining momentum in Zimbabwe. I just took time to look at other individuals or companies that are making use of facebook live and I noticed people are much more interested in the just-for-the-fun-of-it type of videos than the formal ones- even better when they are from a celebrity and are random. I also realised that people loved watching Jah prayzer, Madam boss, the comic pastor, Ruvheneko and Lameck in no particular order since the viewership ranges per video but hardly anything less than 3k.

So how are these guys doing it??? My observation is most of them were already popular before making their Facebook live videos, so probably they just maintained whatever made them popular and carried it over onto their Facebook live videos.  However, some just leveraged on those who were already famous and tactfully built a following for themselves. As for the secret formulae of those who just rose from nowhere, see above!