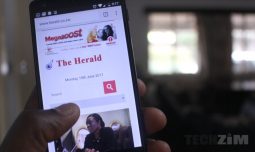 Zimpapers, the country’s largest news company by readership (listener-ship and soon viewership as well) has appointed a new general manager to oversee the group’s Digital and Publishing Division. The new head, Marks Shayamano, is a Zimpapers veteran who has apparently been with the company since 1985.

He was recently the GM of Zimpapers in Buawayo where he’s credited with turning around the operations of the regional branch. In short hes a guy that probably knows a thing or two about ensuring profitability for a publisher.

Essentially, Shayamano is now in charge of the company’s future with regards to making sense of the internet. That the internet is a huge disruption to content delivery and consumption (whether that’s text, audio or video) is not without doubt anymore. The question is how fast the acceleration of audience migration to digital platforms will be.

The interesting thing is that Shayamano is also in charge of the Publishing Division which is the business side of the print publications. Basically, he’s in charge of making money both on the internet and offline. This is interesting because of what Techzim wrote in the article “A profitable media company that is in internet trouble“:

A better structure would be separating digital and print publishing completely and demanding results from the digital division. That structure would let the digital guys know that it’s ok to compete with their print cousins in the group. That way Zimpapers can start eating its own lunch, so to speak, before someone external does it. And that article about internet trouble makes it clear the externals have already started eating that lunch.

2 thoughts on “Zimpapers appoints new GM for Digital and Publishing, and what this means for its future”