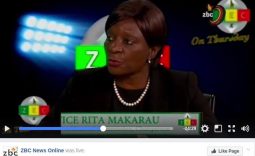 Zimbabwe Broadcasting Corporation (ZBC) is trialing the broadcasting of its content on Facebook Live. The government owned broadcaster started going live on Facebook with regular TV broadcast two days ago on 16 August.

Yesterday, the 8PM news bulletin as well as some regular tv shows were broadcast live on Facebook for about 2 hours.

The videos garnered about 5k total views each, which is not much yet, but will surely increase as more people get to know about this.

We’re not sure what the general objective is but our guess is that ZBC is trying to increase its audience on digital platforms. The reality today is that there are lots of people on mobile and social platforms where video dominates engagement and time spent. ZBC therefore probably realises it can increase its content reach through Facebook.

Unlike linear TV, Facebook provides the opportunity for the audience to watch content at their own time and on a platform of their choice.

There could also be a revenue opportunity for ZBC on Facebook. In January this year Facebook started testing a new “mid-roll” ad videos, giving video publishers the chance to insert ads into their clips after people have watched them for at least 20 seconds.

Facebook also makes sense for ZBC because mobile operators in Zimbabwe provide app specific data bundles particularly for Facebook, WhatsApp and Twitter. YouTube, which could have been an option, doesn’t yet have a bundle locally.

ZBC is not the first media company to see the opportunity of Live Facebook broadcasts, Zimpapers (also owned by the government), NewsDay, and personalities like Ruvheneko have been posting video content live to Facebook for a while now.