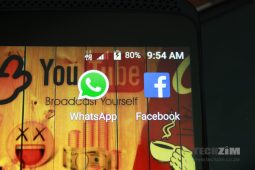 According to the New York Times who spoke to security experts, WhatsApp is currently being blocked in China. It is reported that in mid-July, Chinese censors began blocking video and voice chats, and the distribution of photographs or other files using WhatsApp.

WhatsApp has been one of the few chat applications available in China that has end-to-end encryption which allows people to chat securely without anyone viewing the messages between the people. So with the upcoming Communist Party’s Congress gathering in Beijing which will decide on the party’s leadership that will, in turn, run China, it makes sense why WhatsApp would get fully blocked now.

The recent blocking of WhatsApp in China comes a few weeks before Beijing hold their Communist Party gathering which starts on 18 October 2017. This event is held once every five years and the congress selects the party’s leadership which will, in turn, run China.

Zimbabwe is about to enter an election period and people have already started registering to vote. So it brings the question, could Zimbabwe be next to have WhatsApp being blocked? Last year, we got the wake-up call when the internet was briefly disrupted and people couldn’t send WhatsApp messages also.

In China, it is a bit easier for apps to be blocked as the country has a firewall which monitors and controls any internet traffic that moves in and out of the country. Locally, there hasn’t been a facility like that setup yet so if WhatsApp is to be blocked then every internet service provider or mobile operator would have to be told to do so.

We’ve seen it happen as I mentioned earlier so it is definitely possible. Whether it will happen or not is still unclear. However, in the event that we find ourselves in the situation of people in China, you can always use a Virtual Private Network (VPN) to access WhatsApp if it is the one that’s been blocked and the internet is still up.

People in China are not so fortunate to have that VPN option easily accessible as the country has banned VPNs and Apple has even gone on to remove 60 VPN apps from their App Store following that decision. However, people using Android phones aren’t affected that much as they can easily download VPNs from third party services but most Google services aren’t even available there also. Interestingly, WhatsApp was the only Facebook app that was still accessible from the country until now.

So it’s a big loss for Facebook as they have been trying to capture the large Chinese market but have failed to do so as Facebook itself has been unavailable in China since 2009. Hopefully, Zimbabweans won’t see the same fate as China in the upcoming year.

12 thoughts on “WhatsApp is currently being blocked in China, could Zimbabwe be next?”