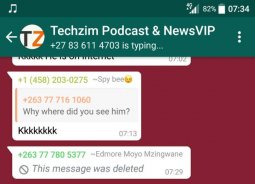 WhatsApp introduced the Delete For Everyone feature end of last month. The feature allows you to delete messages you have already sent and have them removed from the recipient’s phone. The message is replaced with a message which says ‘This message was deleted.’ If you send a message you regret you however have only 7 minutes to delete it.

When the feature was announced some said they would simply take screenshots of their conversations if there are messages they fear could be revoked. That only works if you open WhatsApp before the message is deleted however. Despite that shortcoming, it is one method to thwart the attempts of those who would delete messages.

Android Jefe have discovered a way to read messages that have been deleted that doesn’t require you to screenshot every time you get a message. It only works on Android though, sorry iPhone and Windows users.

What you simply have to do is access the Notification Logs of your phone and the message will be there despite having been replaced by the ‘This message was deleted’ message in WhatsApp. You have to be running Android 6.0 or higher. It may still not work on your phone though.

There are two ways you can go about accessing the Notification Log. The easiest is downloading an app called Notification Log from the Play Store. Once downloaded, grant it the permissions it needs and you should be good to go.

The other method does not require you to download anything. You have to long press on an empty space on your homescreen. Select widgets and then select Settings then Notification Log. An icon will be added to your homescreen. Tap on that icon and once in the Notification Logs, find WhatsApp and tap on it and you will be able to see the messages you received, deleted or not.

That’s how simple it is to view those deleted messages. We tried it ourselves here at Techzim and it works.

The limitations of this method

So there you have it. Android users can get to read deleted messages. It’s not a big deal but it is what it is.