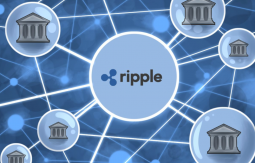 Cryptocurrency powerhouse Ripple, is joining forces with major banks to provide cross-border payments. The tech company has had a pretty rocky start to the year after seeing its prices drop, similar to Bitcoin. However, its cross-border payments plans could be just what the company needs to turn things around.

Ripple’s venture into cross-border payments comes after its founder, Chris Larson, called the current international payments system “unacceptable”. As it stands, it would often be quicker to mail money to Europe than it would to send it via bank transfer.

Larson believes cryptocurrency could revolutionise the market and put a stop to lengthy international processing fees. He also sees an opportunity in other markets but claims cross-border payments are the biggest, and potentially the most lucrative, market to focus on right now.

Deals struck with Santander and MoneyGram

Ripple has already joined forces with MoneyGram and Santander to implement cryptocurrency cross-border payments, but it’s currently only in the testing phase.

In its agreement with MoneyGram, Ripple will act as a medium between cross-border payments. In order to benefit from these payments, customers do need to have a funded account already set up. MoneyGram recognises that blockchain technology is something which needs to be focused on and Ripple is considered one of the leaders in the sector. The new cross-border payments will be referred to as “xRapid”.

Santander UK has also invested in Ripple, claiming it recognises the company as an innovative technology. The company likes to keep on top of the latest technological developments, such as InnoVentures which is a fintech investment section. So, it’s no surprise they have invested in Ripple, one of the leading cryptocurrency companies currently available. They’re hoping to be one of the first to take advantage of a technology which is set to revolutionise the banking sector.

Could Ripple take top spot in the cryptocurrency market?

As Bitcoin took a huge dive at the start of the year, it’s led many experts to believe Ripple could take the top spot in the cryptocurrency market. Although Ripple itself has been affected by the downturn in the market as you can see through forex exchange, it does have the potential to bounce back stronger than ever before. Its new deals with MoneyGram and Santander have certainly helped to increase the company’s reputation.

At the moment, Ripple is considered the third largest coin within the cryptocurrency sector, with a total of $51 billion. It’s main competitor, Stellar Lumens, is considered the seventh largest – so there’s quite a lot of difference between the two. Stellar Lumens also only has $8.6 billion so again it’s slumping behind Ripple.

Overall, the new deals struck with MoneyGram and Santander are an exciting development. Together, they could really revolutionise the banking industry, making it faster, easier and cheaper than ever before to send cross-border payments. It’s going to be interesting to see how cryptocurrency and blockchain technologies can be used in future applications.