The most recent Whatsapp update now makes it less awkward to remove someone as a group administrator. In keeping with the messaging application’s update, they will also be adding group calls sometime this year.

On older versions of Whatsapp, if you wanted to revoke someone’s administrative rights you had to remove them entirely from the group and then add them back as a normal user. With this update, admins will be able to take away another user’s admin badge without removing them from the group entirely. There’s a new ‘Dismiss as admin’ option that’s been added if you long press on the name of a group member in the group info section: 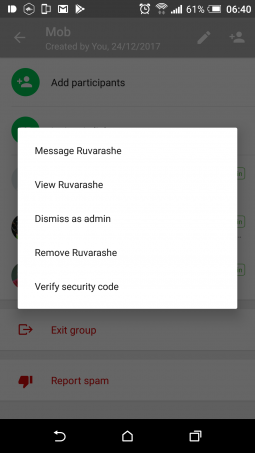 In terms of usefulness, this is more of a tweak to refine the overall experience and less of a big deal. I’m also not sure if this update is available for all users or it’s just for beta testers. Usually, features are rolled out to beta testers first, and then to the rest of the users after the features have been proven to be stable.

The update is available for both Android and iOS which probably means if you update you will be able to access it.

More features on the way…

Recently, Whatsapp added more useful features; last week they were beta testing a feature to allow users to re-downloaded photos they had deleted.

Whatsapp is also testing out group calls for both voice and video calling but this feature has not yet been made available to the public. Even beta testers are locked out of this one but it’s one of the more important features that we have come across in the last few months. It’s also not clear how exactly this will work yet but it will most probably be announced sometime this year.

When the feature eventually comes to users it might be a very cheap way for small businesses to make conference calls or just a great social tool for a group of friends looking to catch up. This will probably be the biggest update since Whatsapp added the Status feature last year (unless I’m missing something). A lot of people, myself included, will be waiting for this feature.