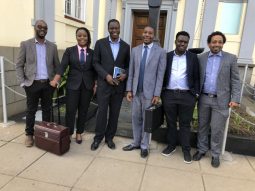 Golix then went to the High Court and filed an urgent chamber application for the RBZ ban to be lifted.

The Reserve Bank of Zimbabwe did not show up to the court hearing at the High Court today and thus the High Court issued a default judgement in favour of Golix. This means that the ban imposed by the RBZ has been suspended.

Golix was represented by lawyers and aspiring legislator Fadzayi Mahere, along with Hopewell Chitima.

It is a bit strange that after all the fuss the RBZ had been making they have taken this lying down. Or are they? Do you think this story is over? Is Golix and all those who are rooting for cryptos going to be celebrating for long or will the central bank now be headed to parliament to try and push this as a formal law? What do you think happens now?

[UPDATE]: Golix confirmed that the ban was suspended temporarily suspended in a letter they sent to their customers on the 29th of May. The issue is actually still in court and the letter to customers reads:

…Before we answer this question it’s important for us to emphasize that the court case is still ongoing and this interim relief is only valid until the outcome of the case is determined in court. Because the case is still in court, we cannot comment on questions that are related to the case and this is the response you will get if you contact anyone on the Golix Team to make an inquiry that is related to this case…