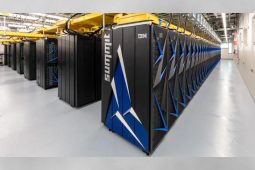 As of right now, the most powerful supercomputer on the planet calls the United States its home. And powerful, it is.

The US Department of Energy’s Oak Ridge National Laboratory (ORNL) last week unveiled a supercomputer, called Summit capable of handling 200,000 trillion calculations per second (200 petaflops). Laying claim to the title of the world’s most powerful supercomputer, Summit is eight times more powerful than ORNL’s previous supercomputer, Titan, which came online in 2012 with a capacity of 27 petaflops.

The previous record holder was China’s Sunway TaihuLight, though its 93 petaflop capacity pales in comparison to Summit. The last U.S. computer to rank first was Titan, which was about seven times slower than the new Summit supercomputer.

Summit’s computing capacity is so powerful that it has the ability to compute 30 years’ worth of data saved on a desktop computer in just one hour. These capabilities mark a huge increase in computing efficiency that will revolutionize the future of American science.

The figures behind Summit

It takes up 520 meters of floor space

It weighs 340 tons, which is more than a commercial aircraft

The system is connected by 297km of fiber-optic cables and can store 250 petabytes of data, which is equal to 74 years of HD video.

More than 15,000 liters of water are pumped through the system every minute, carrying away nearly 13 megawatts of heat from the system. All in all, it uses enough power to run 8,100 homes. However, Summit is considered to be energy efficient than China’s TaihuLight because Summit uses 2 megawatts of power less than TaihuLight.

Summit is about more than just topping China

While that is certainly a benefit, having the most powerful supercomputer in the world and knocking China off the perch it held the last five years, Summit is said to have actually been designed for artificial intelligence operations. It can also use machine and deep learning power to look into health, physics and climate modeling, among other things.

More important, having access to such computing power has real international consequences, which is why there is constant competition to make bigger and better supercomputers in China, Taiwan, Japan, India, the United States, and Europe. Such computers are vital not only for science, but for weather forecasting, climate modeling, nuclear weapons development and safety, and complex engineering problems.

Meanwhile in Zimbabwe and Africa

Zimbabwe’s fastest supercomputer which is housed at University of Zimbabwe is capable of handling  36-teraflops (teraflops are behind petaflops)  And South Africa has Africa’s most powerful supercomputer, which has one petaflop.