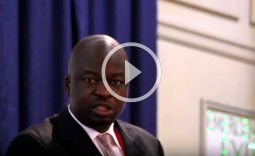 We first published this on the 31st of August 2017. A year later, the then Barclays Zimbabwe CEO, George Guvamatanga is now the newly appointed Permanent Secretary in the Ministry of Finance and Economic Development. We are republishing this post because of the significance of that shift in events.

Anyone who doesn’t export has no right going to their bank to demand their money in cash, said Barclays CEO, George Guvamatanga recently. The Barclays Zimbabwe chief was speaking at the Mobile Money and Digital Payments conference in Harare where he was commenting on the ongoing cash crisis in Zimbabwe.

Earlier, Guvamatanga had questioned why people are making long queues at banks to withdraw cash instead of using plastic money. Asked by a member of the audience why he was ‘criminalising’ the act of collecting one’s cash from the bank, Guvamatanga explained that it didn’t make sense for Zimbabweans who aren’t exporting anything to expect cash at their banks.

Here’s what he said (edited for brevity):

Let’s face something here, you cannot have something that you have not created. We have to understand that when you want the US Dollar, you need to have exported. Farmers and small scale miners should get all their money in cash because they have exported. A civil servant cannot go to the bank and demand all their money in cash because he has exported nothing.

…Same applies to me, if I’m working here and I get my money  credited to my account, I cannot go to the bank and demand all of it in cash. We have to understand that for us to have that cash, someone should have exported.

…We can’t continue saying “.it’s my money it’s my money”. Yes, it’s your money but it’s RTGS… That reality we should face it as Zimbabweans otherwise we have a problem.