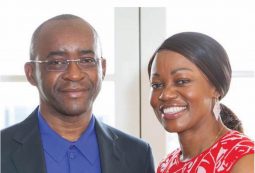 The Masiyiwa’s have been at the centre of several conversations on Twitter in the past year. Generally the couple is quite popular in Zimbabwe but recently there has been polarised opinions regarding the technology entrepreneur and his wife.

Strive Masiyiwa got both very extremely positive and extremely negative reactions when he expressed that he believed President Emmerson Mnangagwa was sincere and therefore needed to be supported by the removal of sanctions.

Rutendo Mandinyarare, a social media personality based in South Africa has also been making a lot of accusations against Strive Masiyiwa and his companies in the past 2 months. This led to Econet Lawyers writing him threatening to sue.

Tsitsi Masiyiwa and her opinions

In April last year Tsitsi Masiyiwa commented on Zimbabwe’s work ethic on Twitter. I doubt she expected some of the backlash she received for her comment. Some folks strongly believed that she was too ‘privileged’ to have any such opinion. The ensuing debate caught us by surprise actually, emotions seemed to run high.

A few weeks ago Tsitsi posted a tweet saying:

Frankly when I saw the tweet I didn’t read anything into it. I thought it was some generalised statement made by someone who had just discovered something and was sharing an ‘epiphany.’

Both Patson and Dewa are human rights activists in Zimbabwe.

As the reactions raged on, Tsitsi Masyiwa decided to delete her Twitter account. Her husband Strive referred to this in a comment on Facebook last night. He narrated how his wife had contributed much to Zimbabwe through the Higher Life Foundation. His full comment:

The Higher Life Foundation has provided scholarships for 200,000 children in Zimbabwe over the last 20 years. With a permanent staff of more than 200 people, it works in every single province of Zimbabwe.
Every year the foundation gives scholarships to 100 gifted children (10 from each province, including 50 girls). This 18 year program which we call Joshua Nkomo Scholarship prepares students to go to some of the best universities in the world. This program has produced a Rhodes Scholar 5 years in a row. There are currently 354 Joshualites studying in the United States.

Now here is something I want to put on record:
#1. Higher Life Foundation and the Joshua Nkomo Scholarship program, is entirely the brain child of my wife Tsitsi Masiyiwa.
She is the one who set them up and EVERY OTHER PROGRAM and manages them on a full time basis.

She just comes to me for the money.
She is also the one who finds all the donor partners who we work with throughout Africa.

I have never seen the foundation, and I have never participated in any of its activities, beyond providing the money. I’m not even a board member.

I have not been to Zimbabwe for 18 and half years, but in all those years my wife insisted she would continue to go there, and was once detained and questioned by Mugabe’s police for an entire day.

She travels the length and breadth of Zimbabwe every year supporting orphaned and vulnerable children,

#2. When the Cholera outbreak began in Zimbabwe a few months ago. It was my wife who showed me the World Health Organization presentation that predicted that it could kill 10,000 people, if it went unchecked:
She demanded that I put up $10m to cover the cost. Subsequently she asked for another $10m. Now she has asked that I commit $60m to help restore water and sewage piping in Harare.

She is the one who drafted the letters that I had to sign to donors around the world.

To paraphrase the Apostle Jude, “we must contend, and fight for that which is good.”

The person referred to by Strive as being employed by his friend seems to be Dewa Mavhinga. Jonathan Moyo who is also quite vocal on Twitter had this to say in response to Strive’s comment:

One need not hold a brief for @dewamavhinga to realise how shocking, outrageous & unacceptable it is for Strive Masiyiwa to accuse Dewa of cyberbullying his wife; & top that by peddling his crap accusation on the Internet while name dropping, in the hope of costing Dewa his job!

…who are the “some” & what gives Strive the notion that Tsitsi has a right to condemn the “some” without any objection from anyone?

…The apoplectic response by Strive Masiyiwa is disproportionate. And it’s particularly nauseating that Strive drags Dewa’s employer into the imbroglio!