The death of the founder of QuadrigaCX – the largest Canadian cryptocurrency exchange- last December is proving to be as expensive as it was unfortunate. It’s estimated the founder died with the only encryption key to the exchange’s $190m. If a court filing by Jennifer Robertson -widow to the deceased- is to be believed then the people who had their money in the exchange have been left for dead:

Quadriga’s inventory of cryptocurrency has become unavailable and some of it may be lost.

The laptop computer from which Gerry carried out the companies’ business is encrypted and I do not know the password or recovery key. Despite repeated and diligent searches, I have not been able to find them written down anywhere.

Of course, people who had their funds in the exchange are not taking to this news lightly and some do not even believe that the founder of the exchange actually passed away as the exchange’s Facebook page claimed. The comments section on the post after his death have not exactly been kind; 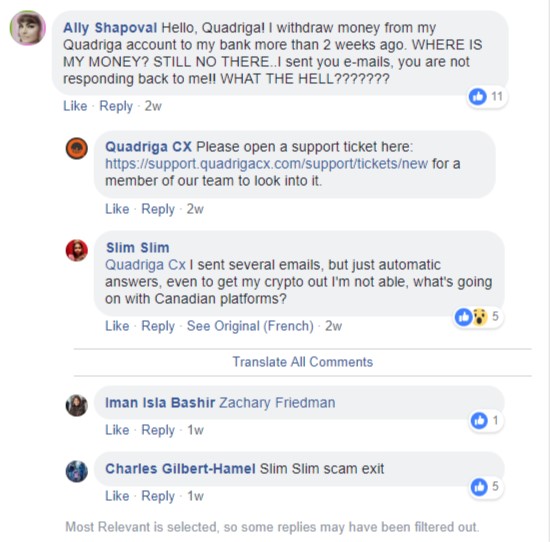 What makes the situation more unfortunate is the fact that the company kept accepting funds after the death of their founder passed away. Quadriga directors only instructed the exchange to stop taking accepting funds on the 26th of January – well after the man with the passwords died.

Another blip on crypto’s ascendency?

This story is yet another blip on crypto’s wider acceptance and claims of it being the replacement of money as we know it. To the ordinary person on the story the fact that people cannot access $190 million because someone died with a code is pretty appaling. If it’s this easy to affect such a sizeable investment then it’s also clear that crypto’s may not yet be ready for wider adoption.

In fact in the African context, where accountability does not exist, just imagine how many times passwords would disappear just so that governments could steal money.