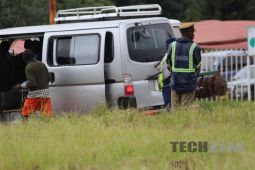 When hyperinflation was at its peak the Zimbabwean Parliament came up with a novel way to solve the fine (old people call these faindi) problem. Instead of actually stating the fine an individual is supposed to pay as an admission of guilt they came up with a sliding scale starting from level one to level fourteen.

When they make laws such as the Criminal Codification Act they can just say a person found guilty of violating section blah blah of the Act shall be liable to pay a level 2 fine instead of saying a  £20 fine as they do in other countries with stable currencies. Stating the actual amount would mean the entire Act has to be amended every time you want to increase the amount in line with inflation.

These fines were hiked in the last budget

When Finance Minister Ncube presented his latest budget he increased these fines. These fines were gazetted as part of this year’s amendment to the Finance Act and became law. Of note is the fact that the schedule calls the effective currency to be used to pay these fines as USD. In theory and according to the little law we know, all prices immediately before the latest Monetary Policy in USD are deemed to be now in ZWL.

This effectively means that the President in his sole capacity amended several Acts of Parliament. That in itself is very concerning and is being challenged at the High Court. However, as long as it, the amendments, currently stand it means that the fines will remain at their current levels.

Some people I talked to were under the mistaken belief that the government would now do what companies are doing and apply the prevailing intermarket rate to these fines. That would be incorrect. I strongly suspect that when the Minister of Finance promulgated these fines, back when we lived in the fairy tale world of 1:1, he principally raised these fines to take into account the fact that ZWL currency is not on par with USD.

One thought on “Is The Government Going To Hike Fines Too?”