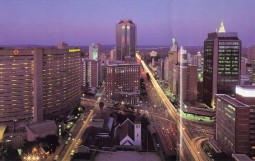 The first industrial revolution, spurred on by the textile industry in Britain, brought about new economic dynamics. New industries, new business models, new revenue streams, new labour patterns, and more. Three hundred years later, the fourth industrial revolution (4IR)’s unique complexity, scope and velocity of change, compared to the 1st, 2nd or 3rd industrial revolutions, cannot be expected to be as transcendent as the “Big Bang”, without commensurate redefinition of the economics around it.

If developing countries are going to use 4IR to sling-shot around the development curve, the economics of 4IR need to be in step with the technological, societal and commercial changes.

There are several nuances of 4IR that have already emerged that need to be peered into. The first one is the shifting of productivity to “centres of technological power”. Whilst the productivity scale has always been lob-sided in favour of developed countries, the proceed-with-caution sign needs to be raised again.

American companies, especially, are unrelentingly producing software solutions that automate, for instance, IT services. Products like Ansible have virtually replaced the jobs of Information Technology (IT) administrators through the automation of IT systems management tasks. Local firms are enamoured by these solutions because of their incredible cost-savings, garnered through the reduction of IT administration human resource costs. In fact, most of these solutions can be deployed into organisations for “free”.

This leads to the redundancy of affected employees and ultimately job cuts. Whilst job-losses are likely to hit Africa because of automation, the companies producing these products are “gaining” Economic Productivity for their countries across the entire value chain of product design, development and support. Gross Domestic Product (GDP) literally moves by osmosis out of developing countries to the centres of technological power.  The question to ask is; What trade laws exist and apply to cross-border consumption of digital services? There are no trade zones, no quotas, for apps!

The growth of digital services trade could trap developing countries in a vicious cycle of consumption, and not the preferable virtuous one of production, IF technologically less-advanced countries do not start exporting technology services themselves.

Consider cloud services: if the adoption of cloud services means that businesses can host their data and applications with a cloud service provider and not invest in their own IT infrastructure, again, there is a transfer of GDP to the countries dominating in this area. Developed countries are gaining in this regard because they are setting up vast “server farms” which house cloud computing systems.

Developing countries therefore need to produce home-grown, exportable technology solutions, to balance the trade. During the previous iterations of the industrial revolution, many developing countries exported raw materials and imported them back as processed, finished products. Fourth industrial revolution economic policies should not be ahistorical, but rather engineered to reflect lessons from the past.

The second nuance is the distribution of factors of production such as Capital, Labour, Land and Entrepreneurship. With pervading globalisation, established markets will benefit more from the unfettered transfer of some of these factors to countries that already have them in highest concentration, unless, of course, drastic economic policies are put in place. Because of the impending dominance of digitalisation in commerce and industry, capital will flow to countries leading the charge in the advanced research and production of Artificial Intelligence, robotics, and other related technologies. The evidence is irrefutable; look at the market capitalisation of the firms involved.

Skilled “labour”, which is the substratum in the 4IR technological developments, is in comparatively less supply in developing countries. That means, at a macro-economic level, national budgets will need to be reimagined to provide funding for prioritised 4IR development areas.

The economic policies needed to support the fourth industrial revolution in developing countries will require consultation and participation of all relevant stakeholders – technology experts, educators, commerce and industry, trade unions and labour, and a strong underpinning of political will. The role of political leadership is key; as the adage goes, “politics drives economics”. The fourth industrial revolution is a great opportunity for an “African Renaissance”, but this can only be achieved if the economics around this revolution are adequately understood, and effective policies formulated and implemented. The latter being of utmost importance.

One thought on “The Economics Of The 4th Industrial Revolution”