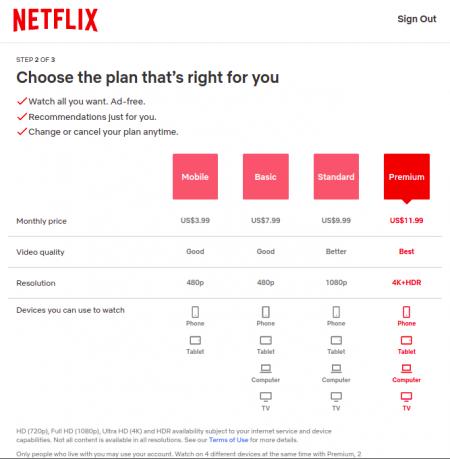 In March of this year, seems like forever ago, to be honest, we learnt that Netflix was now prodding those who shared accounts to get separate accounts. Several people who did not live in the same household i.e. appeared to have two different IP addresses but were watching using the same account would get a message prompting them to get separate accounts. Now it seems Netflix has resumed this crusade.

This time around it’s slightly more forceful. According to several publications online if you try to log in into a Netflix account away from the home of the original account owner you will get a little notice saying:

If you don’t live with the owner of this account, you need your own account to keep watching.

That seems to be the very same message that Netflix would show to those that appeared to be sharing accounts. This time however things are a little different. If you want to bypass that notice you need two-factor authentication. Netflix sends a code via email to the original account owner. You will have to enter that code in order to bypass the notice.

Of course, the notice is not insurmountable. All you need to do is enter the code and voila you are in again. You will be able to watch Netflix using the shared account just like before but I bet Netflix is hoping that the notice and the inconvenience is enough to make several people nervous, take a pause and hopefully get their own accounts.

The new tactic makes sense because Netflix is obsessed with one number-new subscribers. It’s a metric investors and shareholders of the company are enamoured with. Last year Netflix raked in new subscribers by the millions as people who were now staying at home due to lockdowns sought new ways to entertain themselves. This year has been different as things have slowly opened up. They have consistently missed their subscriber growth targets much to the chagrin of investors and the company’s leadership.

On the other hand password sharing is a very popular practice. So popular that many have speculated that as much as a third of Netflix subscribers share their passwords with friends and family. In Zimbabwe there is not a person I know who has their own unshared account among my many TV show and movie devouring friends.

In the past, Netflix has just shrugged this off the same way Microsoft used to shrug piracy in third world countries. They probably figured that as long as these people were consuming their content on their platform they would get used to the Netflix way. The hope would be that at some point they would turn into paying customers. This new notice and requiring a code is probably a way to nudge them along and transform them into cash cows.

Or maybe it’s nothing and this is Netflix just enhancing their security. Services like Amazon Prime Video and SBS have always required a security code in addition to you having the right password. So there is that too.

3 thoughts on “Netflix resumes its crackdown on password sharing”