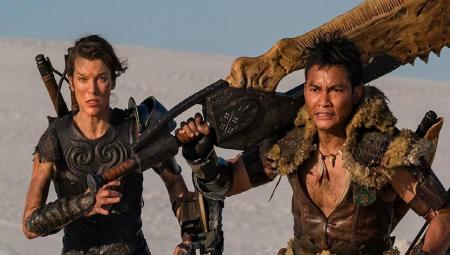 These days chances are if you open your Netflix app you are either confronted with Monster Hunter or the latest instalment of Tomb Raider-the one without Angelina Jolie. Neither films are particularly new. Monster Hunter is a forgettable film from last year that was an unlikely Box Office success while Tomb Raider is an unremarkable action from 2018. Both films also happen to be based on video games.

So while am talking about yesteryear films instead of the latest stuff? The truth is while I watch movies as soon as they soon DVD/HD the bulk of people don’t. I have noticed this with my family who barely pirate anything. Netflix remains their video portal of choice. That’s where they get to scratch their entertainment itch. As far as they are concerned Monster Hunter is a new movie the hot item on Netflix.

I will have to admit it has been a while since I watched a newly released movie and enjoyed it. These days I just plough through new releases with weary resignation. More often than not the whole experience is powered by fear of missing out rather than personal pleasure. I have to be familiar with the details of the plot so as to have a conversation with my movie-obsessed friends. Even with such a low bar Sony’s Monster Hunter still plumped low depths.

It’s worse than the pointless drudge that is Marvel’s Black Widow. It’s even more unnecessary than Fast and Furious 9- it took all the self-restraint I have not to want to take a golf stick and bash my TV during F9. The actors were even smugger than those in Tomorrow war. They are so full of importance you can hear the boastful crooning in each delivered line.

Monster Hunter is just another Underworld instalment
That’s the trouble right there. Perhaps Sony missed Underworld so much they just decided to remake it with another title. Just like Kate Beckinsale in Underworld franchises, Milla Jovovich in Monster Hunter battles and hunts monsters we don’t even care about and goes around saving an indifferent world.

Nothing in the movie feels real or relatable. There is no emotional connection. We just have an invincible heroine showing off her skills. Even the very human face of Megan Good does nothing to save this horrible movie. It’s an endless drivel of noise, screams and ultimately cheers. The sort of stuff they play on an endless loop in some version of hell.

Seriously there is no saving grace here. The dialogue is bland and uninspired. The same empty heroic bluster Van Damme and Stalone used to make in the 80s and 90s are just recycled. They even copy the exaggerated deep voices in a bid to sound tough but all it does is make you want to do violent things upon them through the screen. Each time a monster popped up from beneath the alien landscape I would loudly cheer for it. The only bit of pleasure you get is when it gorges someone.

I am being honest when I say this movie is unsurvivable trash. Even the featured weapons make you cringe. There is a dude with a bow as think as my arm that shoots cartoonish arrows. He also sports the most unlovable hairstyle you can find and wears camouflage. One of his colleagues has a very large machine gun and the main actor has a rocket launcher. How does such a weapons combo even make sense?

Most importantly why did Netflix even get this? Where are they trying to boost their subscriber numbers? Is this some misguided response to Disney+ success with Black Widow? Why would anyone write this? Why would anyone finance and produce this?

Why would anyone watch this? Some sort of penance perhaps. Dear reader spare yourself the hour and a half of miserly because this movie is absolute garbage. You will affirm this yourself if you so wish but I doubt you will be able to cleanse your mind’s pallet.

The only this would make sense is if this was an action game. So they’re making a game or something for the PS 5. The movie is probably some sick, long intro video of sorts. What’s even more perverted is that you are being paid to watch it.