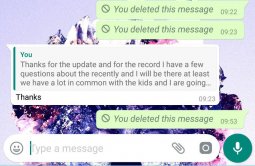 This is one of the things that annoys me about WhatsApp. They take too long to give us some of the nifty little peace of mind features we want. They were late to give us the ability to delete the messages we had already sent. And when they did allow us to ‘Delete for everyone,’ they only allowed us to delete 7 minute old messages. Longer than that and you were out of luck.

They then increased the limit to 1 hour, 8 minutes and 16 seconds, which is the current limit. Why WhatsApp, why? That is 4096 seconds and those who know the inner workings of computers and how binary conversions work will note that that is (1024×4). It couldn’t be more arbitrary, the only reason for that choice being laziness on the part of the developers.

Apparently, reason has prevailed and the WhatsApp developers have had their coffee and now, that arbitrary limit looks set to be increased. To what? You ask. To an undefined time period. WABetaInfo found that they could delete a three month old message in the latest preview beta. So you won’t see this work on the public beta most of us are signed up for.

This is not to say the new limit will be three months like some are saying. It appears there won’t be a limit at all, meaning we could be deleting years old messages in the future. However, let’s rein in the excitement, this feature is under development and things could change dramatically by the time the feature is added to the stable public build. We have seen this before from WhatsApp, exciting features killed before they reached the public.

The other matter to consider is whether we will be allowed to delete messages we sent before the update when it does come. It could be that messages we send after the new undefined time limits are added are the only ones we can delete.

Whatever the case, those of us clumsy enough to send messages to wrong recipients every now and then will be waiting eagerly. I really hope WhatsApp will stop telling everyone that I deleted a message. I mean come one, it’s gone, why tell people something was redacted? Well, that’s another story for another day.

One thought on “Want to delete a message you sent a year ago? WhatsApp working on it”