In my time, I have seen loan sharks break the legs of debtors that miss payments. I have seen treasurers disappear with ‘cooperative funds.’ Even church leaders have been known to dip into church coffers. All this was not shocking, but when registered commercial banks were run like neighbourhood loan shark operations, leading to bank closures and Zimbabweans losing their hard earned savings I took notice.

Banks were not supposed to fold like that. Whatever regulations the Reserve Bank of Zimbabwe (RBZ) had were either inadequate or were inadequately enforced. To this day, trust in the finance sector is still low because of that.

The RBZ has been trying its best to rectify that. One way they are trying to avoid the mistakes of the past is by requiring a higher capital base for players in the financial sector. To reduce the probability of default by banks and to ensure that withdrawals can always be made, the RBZ set high minimum capital requirements for banks and other banking institutions.

How is this capital requirement supposed to help?

Banks use the funds that are deposited with them to earn extra income. They can lend out the deposits and earn interest on the loans. Or make other investments including underwriting, sales and trading services etc.

Zim banks were even relying on investments in fixed assets as maintaining liquid assets or lending turned out to be too risky in the country.

When left unchecked banks have been known to engage in risky investments that compromise their ability to meet their depositors’ needs. Even jeopardising their own going concern statuses too.

So, the RBZ requires that they have a minimum amount that’s not held in risky investments. There has to be some capital held as ordinary stocks, reserves, retained earnings and other stable and fairly liquid forms.

So, in the case of banks, their stocks, reserves, retained earnings etc have to exceed US$30 million. This ensures that the banks have enough capital to weather operating losses whilst honouring withdrawals etc. So if say, most of the bank’s loanees default, that would not lead to default as there is that huge capital base which can be used to sustain operations.

This is akin to having your church treasurer forced to keep a certain amount of their personal money in an account they do not have solitary control over. You rest easy knowing that should the treasurer take liberties with church funds, you can still recover from that other account.

This US$30 million requirement was supposed to have been met by the end of 2020. However, the deadline was extended to 31 December 2021 because the pandemic disturbed bank operations in 2020. So, now that December 2021 came and went, where do we stand?

Of the 13 commercial banks, only two had not met the requirement. 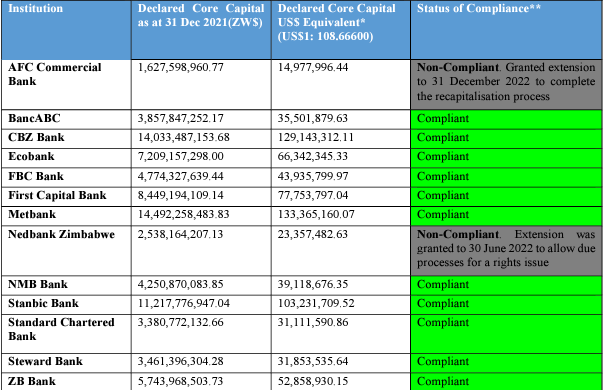 AFC Commercial Bank declared core capital of slightly less than US$15 million as at 31 December 2021. That’s less than half of the required capital base. As we expected though, the RBZ extended the deadline for them to 31 December 2022. The RBZ does not actually want to see the closure of any bank believing it would send the wrong signals to the market.

Nedbank Zimbabwe was about US$7 million short and was given until 30 June 2022 to make their rights issue and sort it out. They didn’t need that long as they complied with the requirement on the 9th of February 2022.

That is if we assume that the US$30 million benchmark is not overkill. On the other hand, we should also not mistake capital levels for stability. The fact that all but one of the 13 banks have met the high capital requirement does not mean that all but one of the banks are stable. AFC could be more stable than some of the other banks and looking at the individual banks’ books can reveal what’s what.

These Tier 2 financial institutions need to have a minimum capital base of US$20 million. We had five building societies but two of them, CBZ Building Society and ZB Building Society will be merging with their commercial banks.

CBZ Building Society will not exist after the merger with CBZ Bank and so will not have to meet the separate US$20 million minimum requirement. The process is underway and the RBZ notified the public of the official amalgamation proposal. ZB Bank and ZB Building Society were supposed to have completed their merger before the end of 2021 but that didn’t happen. We’ll see when they eventually merge.

That leaves NBS as the only non-compliant building society. They have until the end of March 2022 to complete their recapitalisation process. With a capital base of $3.7 million they have it all to do to raise that capital to $20 million by the end of March.

None of the 5 DTMFIs had met the US$5 million minimum capitalisation requirement when the deadline came. Only African Century Limited was even close at around $4.8 million. 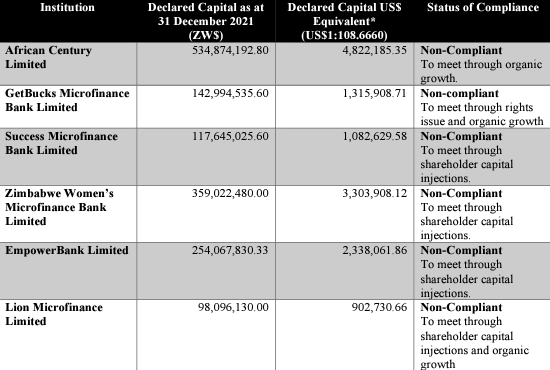 The Zimbabwe Stock Exchange confirmed that GetBucks has commenced negotiations for funding to raise up to US$5 million to recapitalise. GetBucks is fortunate enough to be listed on the ZSE and should find it easier to raise the required funds.

I’d be worried about Lion Microfinance especially. With less than a fifth of the required capital and no possibility of raising funds from the public, they are in a bit of a bind. Just a few years back the company was placed under curatorship for low capitalisation. They recapitalised and were removed from curatorship but now with these higher capital thresholds, the fight starts all over again.

Again, capitalisation is not stability

I think we should all make a habit of following the news around the finance institutions we rely on. We need to avoid those situations where we are surprised when a bank closes shop. We need to have an idea of how these companies are performing at all times. If your bank has been posting losses perennially, you should want to know, before trusting your life savings to them.

The minimum capital requirements look to especially affect the microfinance companies. However, this is not to say that they are unstable. A company with deep pocketed shareholders could appear to be healthier than it is and so research should be conducted on the ones you depend on.