WhatApp is just an instant messaging app but it feels like much more in Zimbabwe. We use it for way more than just that. It is an e-commerce platform, news and other content distribution channel, dating app, customer service channel and more to us.

The problem with using a product/service for something it wasn’t meant for is that we have to hope that the developer introduces features that expand functionality to incorporate our actual usage.

Hence why it seems like we are always waiting for WhatsApp. I can’t count how many times I’ve exhaled ‘finally’ when a new feature was introduced. Case in point.

We are all part of groups/communities that exceed 256 people. WhatsApp’s official group member count limit is 256 which presents problems. For context, Telegram allows up to 200,000 members.

Through the WhatsApp group invite link method you can bump that up the limit to 3000 members, meaning 256 is a soft limit. Some crazy unofficial methods can even increase that limit to 10,000 members.

It is annoying for group admins having to send out the same notifications multiple times. Then also having to respond to mostly the same questions in multiple groups.

The fact that some conversations may happen in one group but not the other means even group members are unsatisfied. I have dealt with members asking to be moved to a different and more active group. 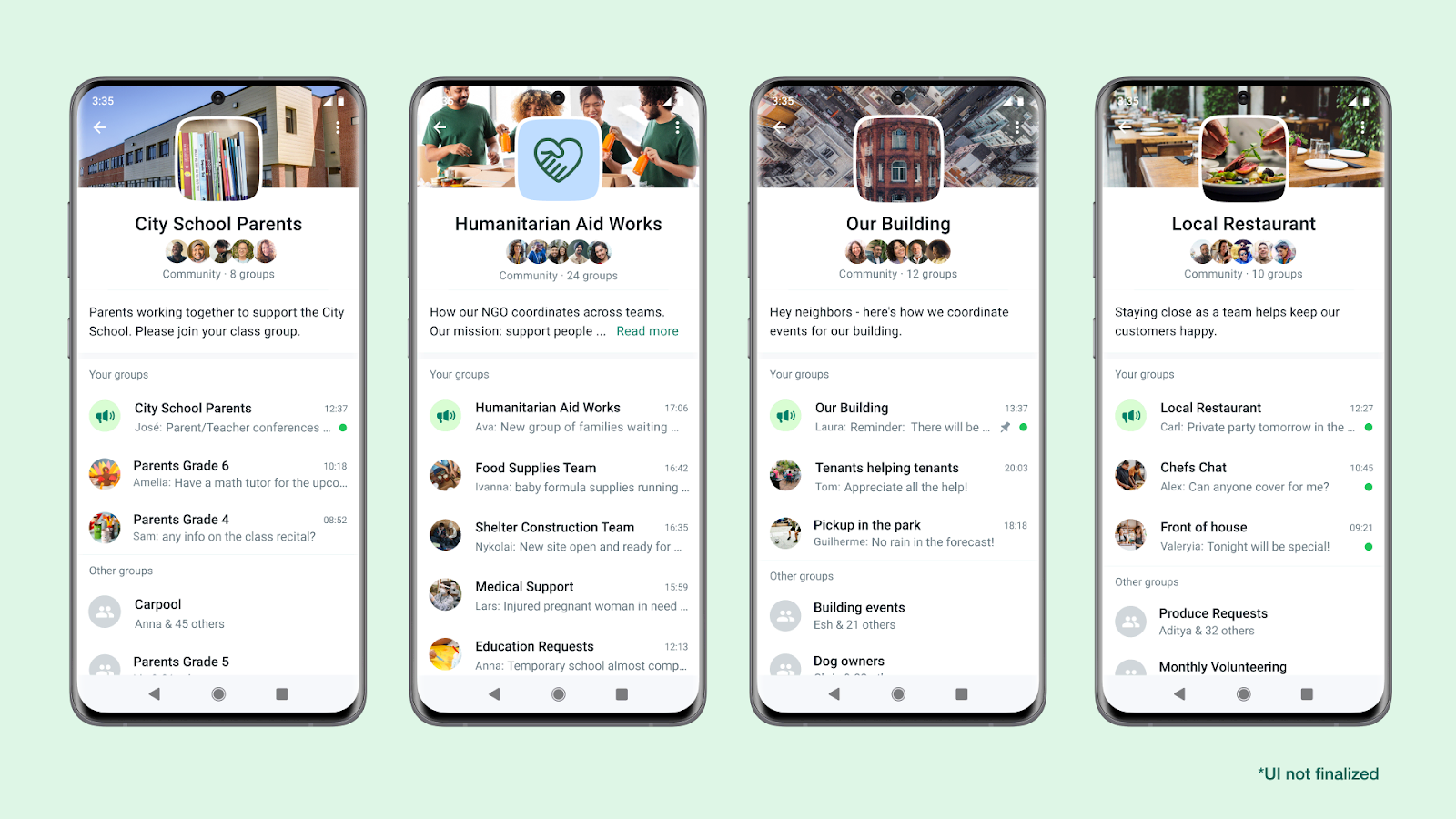 WhatsApp is maintaining the 256 limit for groups but allowing admins to form a group of groups. We don’t know how many groups can join a community but even if it’s 256, that means the community could have 65,356 people and that’s plenty.

I think WhatsApp’s solution is superior to Telegram’s in most cases. A community can have tens of thousands of people but that community can be split into smaller, more manageable groups.

Keeping with the high school example, two main groups could be Boarders and Day Scholars. There are boarder issues that would not interest day scholars and vice versa. They can have their separate groups but then be part of the main, whole school community for some school wide issues.

There can be other sub-groups like A-Level Sciences, U14 Girls Volleyball, O’ Level candidates etc. It makes more sense to have these groups have their own conversations but also be part of the community.

Having just one group that includes everyone like Telegram would not be ideal in this case. It’s hard enough for me to keep up with 20 member groups and so 200,000 would be a nightmare.

WhatsApp’s decisions are made with the assumption that most users are there to keep up with friends, family and other associates and not to interact with businesses.

That’s why although there is WhatsApp Business, it is still a frustrating experience for business users.

For business users using WhatsApp to distribute content for example, they would be okay with 200,000 or more members in one group. They usually make this work by limiting conversations in those groups. Often only admins can post in such groups.

That’s how it is in Techzim’s News Updates WhatsApp groups which you can join here: https://chat.whatsapp.com/KL5jnGjGTPGHxXCjMhOfdO

In that case it doesn’t matter how many members are in the group. A member or admin does not have to wade through thousands of messages by other members. Only the updates by the admins are ever posted making it easy to navigate.

However, removing the chance to interact with members is a drawback. Limiting conversations means the business cannot take on member questions and queries forcing members to use other channels to ask their questions or provide their feedback. It is a bit weird to be in a chat application and not be able to chat, instead having to do so via other channels.

Those all important conversations

WhatsApp realises that back and forth discussions are what make groups useful. So, limiting the number of group members makes sure it’s still possible to allow for chats in the groups.

With that in mind, in addition to allowing for Communities, i.e. group of groups, WhatsApp is making some improvements to the group experience.

Group messages can get out of hand because of reactions to messages. A lovely post can be followed by 50 different kkkk’s, hahaha’s or noted’s. Exiting WhatsApp and returning 30 minutes later to ‘200 new messages’ makes it impossible to read them all. You lose out on some interesting stuff wedged in between the hahaha’s.

WhatsApp is introducing emoji Reactions to fix this issue. These allow users to react to a message without “flooding chats with new messages.”

This feature is already rolling out and those that have gotten it report that there are six reactions available: Like 👍, Love ❤️, Laugh 😂, Surprised 😮, Sad 😢, and Thanks 🙏. This should clean up group chats.

Example of a message with 15 reactions condensed to a bubble attached to the message.

Admin Delete – Group admins will be able to remove errant or problematic messages from everyone’s chats.

File Sharing – We’re increasing file sharing to support files up to 2 gigabytes so people can easily collaborate on projects.

Larger Voice Calls – We’ll introduce one-tap voice calling for up to 32 people with all new design for those times when talking live is better than chatting.