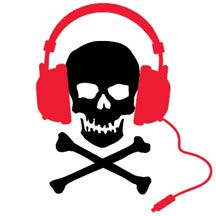 Today, an interesting article posted on Zimbo Jam two days ago caught my eye.  It carried news on how one of Zimbabwe’s most popular musicians, Sanii Makhalima, has found a solution to close the door on the music piracy problem. The solution:

He has set up a new company that is marketing a software product that makes it impossible to read an audio CD on a computer.

What in the world is that? Seriously, in this day and age, why would anyone want to propose a music format that cannot be played on computers and portable media players? Is the big picture even in sight? What a disaster in the making!

First let me say this: Piracy is an enormous problem for all of us! The effects of any misdirected revenue in the country, especially for an industry as big as music, trickle down to everyone. So we, collectively, not just the artists, have a piracy problem.

But this is not a new problem. Bootlegging has been around since the 70s. To think it will just take-leave because of this new software is simply wishful. Whatever the device, a bootlegger can still have his way, there’s no stopping him. Computers just made it a little easier.

What has compounded the problem today is not greedy pirates, no. It is failure to adjust to a changing industry. Records gave way to cassettes, no problem there. Cassettes to CDs, still no problem. CDs are now giving way to digital compressed files like MP3, Ogg Vorbis, AAC, Windows Media Audio etc… and we have a huge problem. An average guy can insert an audio CD into a computer and click “rip”. People love it, they can easily create playlists, selectively pick out their favourite songs  on an album and do away with  carrying a CD library folder around.

To be fair, audio CDs were a nightmare to maintain; a simple accidental scratch on its surface would render songs unplayable. They required extra care. A typical painful process of just playing songs was: manually shuffle through pages of CDs in a CD holder, select CD and pull it out, eject CD in player, place CD, push drive back inside, wait for player to read CD, push next button several times to select song, play song etc. This was even more painful when you only wanted to listen to 2 songs on a 12 track CD. We’re all glad those days are over. Makhalima doesn’t agree; he is proposing we go back to those days.

Faced with a reduction in CD sales, recording companies and artists don’t know what to do hence ill-thought solutions like Makhalima’s here. He does admit this will alienate people that just want to play their legal copies of CDs on computers & portable media players but hits back with “In every war there are casualties, and unfortunately that’s the case here as well.” What he probably doesn’t realize is that many ordinary CD audio players like those in car radios use the same hardware and firmware components also used in computer CD-ROM drives. His “collateral damage” group is really most of the music lovers.

Makhalima reportedly presented this idea to “dozens of musicians, producers, representatives of the National Arts Council, the board and staff of the Zimbabwe Music Rights Association and the Minister of Information & Publicity, Hon Webster Shamu.” What a wasted opportunity!

Makhalima’s solution is not new either. Since as early as 2002 numerous attempts have been made by recording companies to sell copy protected CDs. In particular Sony’s attempt was met with great public outcry,  computer security issues and lawsuits, eventually backing out and apologizing to users for “possible inconveniences” it had caused.

That aside, with technology advancement, CD recorders have already been manufactured by Phillips for example, to rip music off these “protected CDs”. If Makhalima’s scheme has not been cracked yet, it sure will in a short time and all the investment will just be money thrown down the drain.

The cheese has moved, we need to accept it and starting looking for new methods. Instead of trying pull fans back a decade, artists and indeed recording companies should be answering the question: “How can we sell our music in the most convenient format and media of the day?” The answer to that is not a cure-all for the piracy problem but it will get a lot of people buying music again.