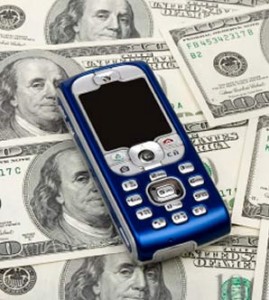 Telecel has announced that it will soon launch mobile banking services on its network. According to a release received yesterday from Telecel, subscribers will soon be able to use their cellphones to buy groceries and airtime, pay bills, deposit, withdraw money and do money transfers.

Telecel hopes to bring banking services to the so called “unbanked” by enabling them to operate virtual bank accounts at a cost lower than that of traditional bank accounts.

Explaining the concept of the service, Telecel says subscribers will have to open a virtual account with a Telecel partner bank. The bank will need the subscriber’s name, mobile phone number, national ID and proof of residence. The only difference with opening a traditional bank account is that subscribers will not need to provide payslips or proof of earnings to open this virtual account.

Beyond opening the account, there is little interaction between subscribers and traditional banks. Telecel subscribers can use their mobile phone to withdraw or deposit money anywhere where there is a supermarket, store, post office or agent that is a partner. We imagine such agents may include the vast network of official airtime resellers already in existence. Subscribers will also be able to make transfers, purchase airtime for themselves or others and make balance enquiries through an interactive SMS process.

This will provide much needed transacting convenience to subscribers in rural areas where conventional financial institutions are not easily accessible. Processes with frequent occurrences such as the remittance of money to relatives in a different location come to mind. In Zimbabwe, a lot of working people in cities remit money back to relatives in the rural areas every month. Currently, unless the recipient of the money has a bank account, there’s no easy way to transfer the money to them.

“With this service,” a Telecel spokesperson said, “your bank is your phone. It goes with you wherever you go.”

“There will be no need for people in rural areas to travel to the city or growth point to withdraw money. Once they have received an SMS confirmation that money has been deposited into their virtual account, they can visit the nearest farmer, supermarket, post office or non-governmental organisation that is in partnership with Telecel to collect their cash,” the spokesperson said.

Explaining Telecel’s visions regarding the product, the Telecel spokesperson said “Eventually we see this service being used for the disbursement of salaries. Pensioners in rural areas will no longer have to travel all the way to the city to withdraw their pensions as long as they have a cellphone, a Telecel line and a virtual account.”

In terms of usability, the requirement of a direct relationship between customers and banks when the subscribers opens the virtual account, makes Telecel’s product somewhat not too different from the traditional banking. Unless ofcourse you consider the lack of proof of earnings the reason why many Zimbabweans are unbanked today.

Telecel’s argument is as follows: “Many Zimbabweans are self-employed and make a lot of money but do not have bank accounts. This service will be ideal for them. They will be able to open an account with minimum formalities and minimal charges.” 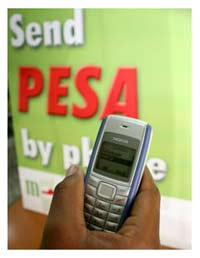 Contrast this with the Vodafone developed M-PESA mobile banking product in use by Safaricom in Kenya. There is no direct interface between subscribers and the traditional banks at all. To start using M-PESA subscribers open an e-money account by going through some menu instructions on their mobile phones.

Comparisons are important but Telecel cannot be judged on the M-PESA experience. The move is really the first major entrance into mobile banking by a Zim telecoms operator and there’s no clear telling how the market will respond.

Telecel, with over a million subscribers, is the second largest mobile operator in Zimbabwe. Econet is the largest with just over 5 million subscribers. While Telecel will ride on as the first mover for now, clearly Econet has a bigger subscriber base backing to make the service more ubiquitous and therefore even more convenient for its subscribers. It’s not hard to see Econet launching a similar product (in partnership with Econet sister company TN Bank) in the next couple of months. It has to or this will sure drive a good number of subscribers to their competitor.