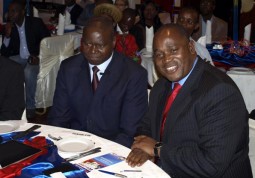 Last night, we attended the official launch for Econet’s EcoCash mobile money service. Even though the event started some 40 minutes late, there was a series of polished presentations, the highlight being the Zimbabwe Reserve Bank Governor’s participation as guest of honour.

Based on presentations by George Barbaressos (the commercial director) and Douglas Mboweni (the chief executive officer), EcoCash will work almost exactly like Safaricom’s M-Pesa. Consumers will be able to deposit cash into their EcoCash accounts through registered agents. The money in the EcoCash account can be transferred to any mobile subscriber in Zimbabwe, regardless of the mobile network.

Recipients will simply need to visit a registered agent to redeem their cash. A big focus of the platform is bridging the rural-urban divide where remittances are concerned. According to Barbaressos, EcoCash has begun purely as a mobile money transfer service as this is the immediate need in the market. With time they will open up the service to work with other banks (TN Bank is the current financial partner), integrate it with services like DSTV, and possibly allow value added services to be implemented on the platform.

In essence, Ecocash is almost similar to Netone’s One Wallet however the key difference is that the later is SIM based and doesn’t allow money transfers to other mobile networks. The EcoCash mobile money service is USSD based and because of that doesn’t require subscribers to swap in their SIM cards. In addition money can be transferred to a non-Econet mobile subscriber.

Telecel also has a mobile money service under the Skwama trademark . Both Skwama and One Wallet have struggled to gain traction mainly as a result of the fact that the majority of mobile subscribers are on the Econet network. Econet could attract even more on the back of EcoCash if its two competitors do not respond effectively.

We believe that Econet’s financial muscle, its fortunate position in the market as a near-monopoly, the absence of ideal banking solutions for the millions of unbanked (and underbanked) Zimbabweans, and the implementation of a proven (by M-Pesa) mobile money model, make EcoCash a product with everything in its favour to succeed.

10 thoughts on “The EcoCash launch event”