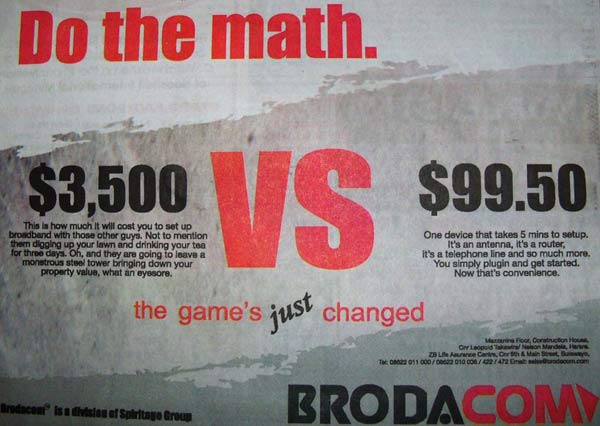 If you’re in Zimbabwe and checked the newspapers yesterday, you probably saw the Brodacom advert above. The advert claims that before Brodacom came along, setting up fixed broadband in Zimbabwe used to cost US $3,500 and that thanks to Brodacom, that figure has been brought down to US $99.50, the price of Brodacom’s Wi-Fi device for small businesses and individuals.

It’s not the first time they have made this claim. The campaign has been running for some weeks now but before yesterday that specific claim was just subtle and it was easy to look over it. Now, it seems after getting away with it a few times, they decided to just come out and try to make it the truth.

It is not true.

WiMax setup from other ISPs and IAPs currently costs between US $200 and $500 and the developments in technology have resulted in a move away from installing equipment on steel towers. No ISP needs to dig up your lawn to setup a fixed broadband connection. Unless maybe they’re laying fibre to your premises, but Brodacom does fibre too so…

Falsehoods aside, the annoying part of all this is the fact that Brodacom has indeed brought cheaper fixed broadband setup options. But they haven’t really revolutionized anything like the adverts would like us to believe. They’ve contributed to lowering costs yes, but these figures are just exaggerated shamelessly.

And it doesn’t end there. The 3.9G and 4G claims too are annoying. And no, we have no idea what generation their equipment is. It doesn’t matter. For us the point is that you should advertise what you are delivering to your customers.

When we tested the Brodacom internet for the review last week, we didn’t experience 4G speeds.  We didn’t even experience 3G speeds. But that’s not to say it wasn’t good internet. It was great internet. We loved it. It just wasn’t what we’d call a 4G experience.

In a market where no advertising association holds companies accountable to what they advertise, NetOne got away with claims they had the widest network coverage when the truth was Econet had far surpassed them, Econet claimed (on billboards around the country) they had 3G when the truth was they could only deliver it to a tiny fraction of their subscriber base, and Spiritage is getting away with 4G claims.