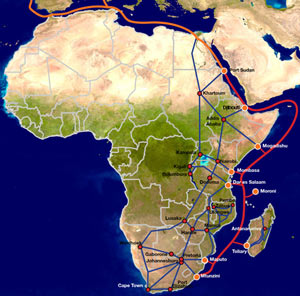 The East Africa Submarine System (EASSy) has a section of its undersea fibre cable broken since 17 February 2012. The broken section is between Djibouti and Port Sudan and according to reports, WIOCC, the consortium that owns the cable, has already started efforts to repair the cable.

Chris Wood, the chairman of the EASSy management committee has commented that the broken cable has only affected services originating or terminating in Port Sudan or those using Port Sudan to connect to other systems for transit to Europe.

Zimbabwe’s state owned fixed telecoms provider, TelOne, is part of the WIOCC consortium and feeds off the EASSy cable through Mozambique. It’s not clear if the EASSy cable damage has affected TelOne but information we’re getting is that the TelOne ADSL service locally has been erratic since Monday, 20 February 2012.

WIOCC has not mentioned when they expect the cable to be fully restored.

You can read more about the cable break on MyBroadband and ITweb.

8 thoughts on “EASSy cable down”