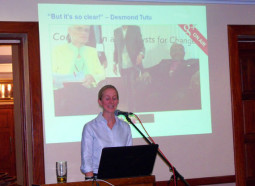 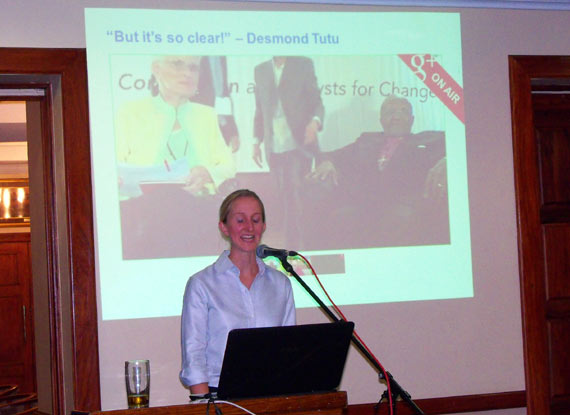 Two days ago we had the opportunity to attend an event organised by Deloitte Consulting in Harare called “The List”. It’s basically a monthly networking event whose purpose is to link the future leaders of Zimbabwe’s top 100 local and international organisations. Usually, there’s a high profile Zimbabwean business person speaking at these events. Business people like Shingai Mutasa, CEO of Masawara and Nathan Kalumbu, the President of Coca-Cola for Central, East and West Africa have spoken at these events.

Anyway, yesterday Deloitte had Julie Taylor, Google’s Head of Communications and Public Affairs for sub Saharan Africa speaking about Google’s strategy in Africa and the products the Internet search giant has launched on the continent. The event yesterday was sponsored by Gikko.net, a startup we’ve written about here before.

Taylor spoke briefly about the growth of access to the internet and mobile phones. She gave some stats from Canalys on smartphone growth on the continent revealing that year on year, the increase in the number of smartphones for 2011 was 101.9% in Africa, compared to 15% in Western Europe and 61 % in the Middle East. Smartphones, according to the stats she presented, now make up just under 11% of all mobile phones on the continent.

In terms of Google’s strategy on the continent, Taylor said it’s divided into 3 parts; access, relevance and sustainability. “Access is about getting people online, and once people are online we want the Internet to be relevant and useful to them,” she explained. “In the long term it needs to be sustainable without the Googles and all the tech companies; it needs to move and grow on its own.”

In the QnA segment of her presentation, Taylor was asked about Google’s recent changes to its privacy policy.  These changes have stirred quite a reaction globally including a Europe-wide inquiry. Her response was that it was more about simplifying the company’s privacy policies which previously included over 60 separate agreements, one for each product. She also said Google uses people’s search history to provide more relevant search results to users across Google services, but that personal information is still protected, and no information is passed onto third parties.

Another question she took was one on how much of a run for their money Facebook had caused Google on the continent, to which she replied: “Facebook is very popular across the continent and it has highlighted how important the concept of “social” is to people whether it’s in Nigeria or Uganda, or Senegal or here in Zim. Social connections to people are incredibly important. In terms of competition, we encourage competition. We think it’s good for the Internet. The more competition there is, the more innovation there is.”

Recently, Google announced that they were enabling Google+ profiles on Google Trader, its classifieds platform for Africa currently operational in Uganda, Ghana and Kenya.