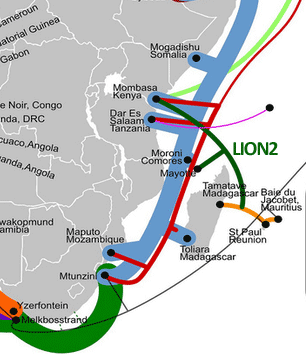 Yesterday, another undersea fibre cable went live in East Africa. The cable, the second Lower Indian Ocean Network submarine cable (LION2) is reportedly now commercially operational LION2 is an extension of the first LION undersea cable and now provides a direct link from Kenya to Madagascar, St. Paul Reunion, and Mauritius, the three countries that were connected by LION back in 2009. LION2 also connects to the island of Mayotte, a France overseas department.

The development brings to four the cables now landed on the shores of Kenya making the East African country one of the most connected countries in Africa.

Here’s more about the launch of the LION2 cable on Business Daily Africa.