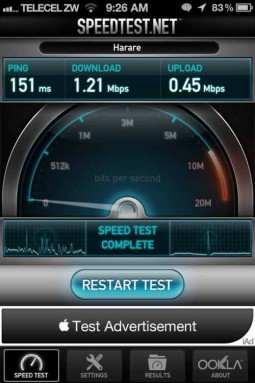 On Tuesday (20 June 2012) I had the pleasure of an 8 O’Clock press conference with some pretty bland exec types and a Pretty cool talking animated giraffe named Max.

Utande was launching their “SME and Home” Wimax service, with all the hoopla and promises we have heard from all the other ISPs when they launched theirs. As sceptical as I was, I attended and got the WPA2 pass into the trusted iPhone for one of the Kiosks Modem thingys and started to stretch test and see what this was about. 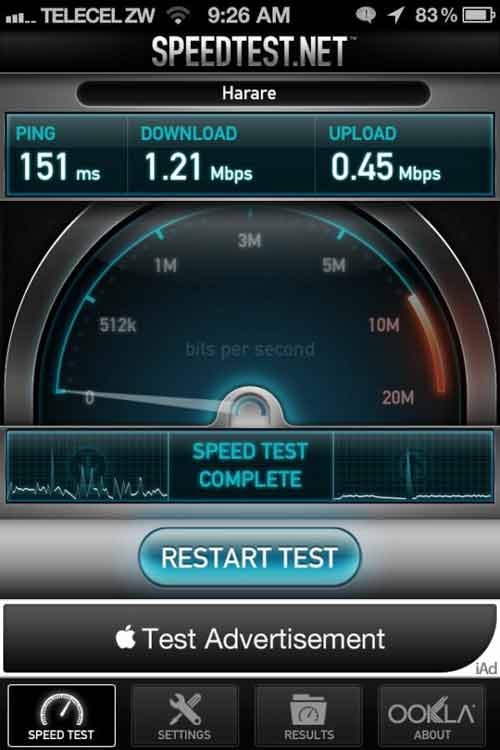 Results:  STAGGERING… Seriously, kept testing and constantly got over 1.2 Mbps Downlink and always around 450kbps Uplink.

Some history if I may: I am currently a WiMax customer of one of the biggest ISP in Zimbabwe (soon to change I assure you) and for the $170 I am supposed to get at 1mbps Downspeed and equivalent Up. What I get instead is 10-11 days of running at slow speeds. I often find it quicker to drive 20kms to clients to drop of a 5mb PDF. For the other 10 days of the month, I spend the majority of my time and airtime calling and visiting this ISPs offices to complain about no service at my home, and then the last 10 days of the month on the road to the various Big Cheese’s I do tech for, calling and visiting the ISP’s offices to complain about no service at THEIR home!

I often find putting some cheap bundles on my trusted mobile phone line and tethering my laptop to my iPhone to be the only way I can actually send an email, because the ISP’s WiMax Up-speed, trickles at 4-6kbps when it’s in a good mood. And it’s not just this particular ISP that has failed me. I also have internet dongles from most of providers that launched mobile broadband services in the past 2 years and they have all been disappointing.

So uMax. Wow! After being really impressed by the speeds at the press launch, I managed to crash their party in the evening on the top of Joina City with the spectacular view of Harare. There, witnessed a guy live streaming the football match, whilst some lady was on Skype Video with someone on the Balcony… did another speed test and was still getting 1.24 Mbps down and around 500kbs up.

My WhatsApp was working like a charm, I was Instagramming, Skped my brother in Ireland till all the fun stopped when my battery died around 9PM. 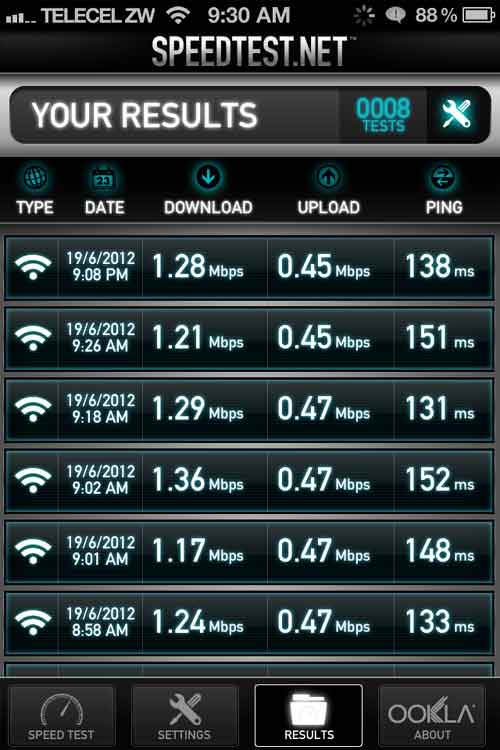 I’ve been to a few of these “launches” and this is the first company that has been able to back its claims at the launch. Most companies don’t even deliver half their promise at launch.

If Utande’s uMAX service reaches my area, I am definitely going to give it a go. I know that once a lot of folk jump onto the service, that’s when the proper stress test comes. Most of these ISPs failing to deliver quality service now are just suffering from failing to scale to their high subscriber numbers and in some cases unsustainable “Unlimited” packages.

In a brief chat with Utande’s Collin, the funky genuis ‘murungu’ who has built the network from ground up, he told me that he was confident that the network would scale properly as more people come on board and his priority is making sure the user experience is 1st world all the time. Well, I’ll believe that when I see that, because I’ve been bitten once.

Check them out at their Kiosks around Zim… locate them at www.umax.co.zw

46 thoughts on “An early review of the Utande uMAX service”