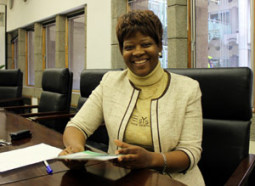 A little more than 6 months ago an Altfin Holdings subsidiary, Altfin Medical Aid Scheme, launched a new mobile phone based medical insurance product called MedAccess. The company became first in the market to introduce such a product, opening up medical aid insurance to previously excluded populations. But the product could only be accessed via a single mobile operator, NetOne, an operator that also happens to be smallest of the 3 major operators in Zimbabwe.

Recently, Altfin announced that MedAccess was now available  to mobile phone subscribers on the other two networks, effectively opening up the product to millions of Zimbabweans that have access to mobile phones but limited access to the traditional medical aid insurance services. We had an opportunity earlier this week to meet Altfin Health General Manager, Thembi Moyo, an energetic individual who speaks passionately about their product and their business case. We discussed a couple of things from how they decided on a mobile phone based medical aid scheme, how its been received in the market, their competition, partners and other things.

She has some very interesting view points so I encourage you to read through and learn what you can. We think there are many lessons to learn for tech startups in there. We post below a transcription of the short interview.

TZ: So tell us about the product; how big the problems is that you’re solving

Moyo: The MedAccess product is a product that we feel will cater for millions in Zimbabwe.  Currently, the people who are covered on medical aid on what we call the traditional schemes are about a million, and the Zimbabwean population is sitting at about 13 million. So we basically saying the difference between that 13 million and the 1 million is not covered. The reason is that the classical schemes were mainly designed for people who are formally employed, that is where you medical aid deductions are happening  between yourself and the employer and the employer remits to the medical aid funds where you are a member.

So we said, there’s an informal sector that no one has taken care of and there are a lot of transaction’s that happen there. And people have the money but there hasn’t been a product which is specifically designed for them as far as health if concerned. So when we came up with the MedAccess product we were looking at the vulnerable people, who are the majority of the people in the nation. Although they do have access to municipal clinics, government hospitals, it’s not every time that they have that $10 or $5 or $15 or whatever they get charged. So we came up with a product where these people are able to pay a particular subscription a month and have access to medical care.

So, it’s designed for the informal sector. We made sure that  it works on an SMS platform so that people don’t have to worry about going to some office or a bank to pay. The recharge cards that we sell for this MedAccess is your premium card and these are in all Zimpost offices and all Altfin offices nationwide.

We are currently working on other distribution channels. We are finalizing with EMali, which is a Tetrad mobile banking product, we’ve also got other stakeholders like the OK retail shops who have shown some interest.

We want to make sure that the premium card is accessible to as many people as possible nationwide.

TZ: So, you’re the only player in this kind of medical scheme

Moyo: Sure, so far we are. We know that competition will come hard and come up with similar products but currently we are the only ones.

TZ: So, how Altfin is not a small company, and to be frank such bold innovation is not associated with companies your size. How is Altfin managing to consider new ways of delivering the product.

Moyo:  Maybe a little background, Altfin Medical Aid started operating in 2010. We entered market that already had players that had taken up the greater part of the million that I’m talking about. That market has not been growing because employment in Zimbabwe hasn’t been growing that much.  In other words that market has been stagnant. It’s just the same people moving from one society to another depending on the benefits but really the market is not growing.

So we sat and we asked ourselves, who are we and what do we really want to do. And we said, let’s start with where there is a need and we come up with a product to meet a need. That was our strategy. And the need is in this. We also run a classical scheme that is doing perfectly well but we felt that there’s no way we can grow as Altfin and there’s no way we can meet a need unless we think outside the box and come up with the a product that is not there and yet meets the needs of the majority of Zimbabweans.

TZ: So how do you manage to keep the subscriptions at $3 a month. How do you manage the possible perception that this is so cheap there must be a catch somewhere? That maybe the cover is not adequate even for municipal clinics?

Moyo: That question has come up a lot of times. But this kind of product, in the insurance business, is a bottom of the pyramid product. It works with volumes. So the more people you have…. can you imagine if today we had a 100,000 members at $3, and on any visit to the municipal clinic they are charged $5 which includes seeing a doctor, prescription drugs. When the municipality clinic cannot handle the case they then refer to the government hospitals.

The charges are not high in those institutions because the government is already subsidizing the services. So when you compare costs at private institutions to the costs at municipal and government institutions, there’s a huge difference. When we bring in the numbers together and you look at the claims that are paid, it’s still a viable business to be in and yet still meet the needs that are there.

Can you imagine the number of farmers that are out in the rural areas who, say, they have a snake bite and don’t have the $3 needed at the local clinic. They resort to the traditional methods and yet it’s a life threatening thing. If you have MedAccess cover, you can rush to the nearest hospital.  There’s a clinic or hospital in every province or district. That infrastructure is already there in Zimbabwe, so we’re just helping people maximize on it.

TZ: So does that perception exist… that this is too low to be true?

Moyo: Yes. We have to do a lot of client education. It’s a new product in Zimbabwe. This has never been done before.  There’s need for a lot of advertising, a lot of outreaches, roadshows. We need to get to the people, to the suburbs, to get this information to as many households as possible.

TZ: So what has the growth been so far?

Moyo: Not as much as we anticipated but we’re happy with the growth. The current membership is close to 12,000. We realized more growth from last month when we opened up to other networks. When we were dealing with just NetOne, we didn’t have that much membership, but recently we opened up to the other two networks (Econet & Telecel) and there has been significant growth.

TZ: What was the process? How come NetOne was easy for you to partner with, but you haven’t been as successful with the other networks?

Moyo: The team at NetOne listened to us and they figured out that it would be good to be the ones that go in with a product that is new and technology based. The decision making at NetOne was very fast and we just went on with it. I must say with the other mobile service providers it hasn’t been that easy, we really haven’t an opportunity to sit and discuss.

But then what we decided to then do is to just offer the product to anyone on any mobile platform. So if you’re on a network other than NetOne, there isn’t a shortcode that you are registering through. It’s just a basic NetOne number that we just make available and it’s up to the people to buy, just like any other product that you see in a shop, if you like you buy it. The number is longer and maybe difficult to remember compared to a shortcode number. But that shortcode is an Altfin shortcode registered with POTRAZ. So if we can engage other service providers, we will be able to use the same shortcode on all networks.

TZ: You say you haven’t been able to meet them even?

Moyo: Not really. We have tried but we haven’t gotten an appointment. It’s been difficult. But we’re pursuing it.

TZ: What about the technology itself? Was this built by Altfin or technical partners?

TZ: Who are these partners

Moyo: eTopup and Spectrum Technologies. eTopup are an electronic airtime distribution company. Spectrum have been our technical partner from the time we started the medical aid, and are the same people that provided us the system that does the traditional medical aid.