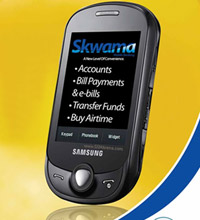 It’s the mobile money transfer service which Telecel Zimbabwe started introducing back at the end of 2010. It was launched in January 2011 but before long, its ads and general branding disappeared almost completely. We just learnt the gradual disappearance was deliberate as a decision had been made to let Skwama “die a natural death”.

Telecel Zimbabwe revealed last week that as a company they not going to be doing any mobile money specific operation in the foreseeable future deciding instead to focus on their core competency of GSM mobile telecommunications.

Obert Mandimika, the Telecel Zimbabwe communications and branding director, explained last week that when the Skwama launched it was being run in conjunction with a local Zimbabwean financial institution called Kingdom Bank but soon realised this was limiting the product’s market size. “We felt that given our strategic options at that moment, there was a limiting factor because we have people that are on other banks,” said Mandimika. Telecel then made a decision to connect their mobile platform to more banks, and to do this they partnered ZimSwitch, a financial switching company connecting 19 of the country financial institutions.

At that point, that the Skwama service had just been killed should have been obvious I guess. Telecel was going into the background and the ZimSwitch Shared Services platform came to the fore. ZimSwitch eventually went mobile network agnostic enabling users of any mobile network in Zimbabwe to transact on their platform. This effectively left the Telecel without its own mobile money service, a move directly opposed to the frenzied rush for direct participation in mobile money value added services that most of Africa’s mobile telcos are in.

“Eventually companies whose core competencies ZimSwitch is on the other side and we believe that because each expert is staying in their own area of competency we are likely to get a lot more of the economies of scale and efficiencies in that arrangement” explained Mandimika.

Telecel are alone in this strategic thinking even in Zimbabwe. Both their GSM competitors, Econet and state owned NetOne have mobile money products of their own in addition to providing infrastructure to the ZimSwitch service. Econet’s EcoCash has registered quite impressive growth since launch and recently introduced merchant services to allow mobile subscribers to buy goods using their EcoCash accounts.  NetOne’s OneWallet has been quieter. Unconfirmed reports say the company’s requirement for subscribers to swap in their SIM cards for a higher capacity 128Kb one had affected the uptake of service negatively.

VAS services offered directly by a mobile network operator, or offered exclusively with a partner, if loved by the subscribers are known to increase the “stickiness” of a network, significantly reducing the churn rate. Telecel says however that people will have the choice and they don’t fear the competition. “We believe that where we are going with the plans that we have, people should be able to have that choice, and they will make that choice by staying on one network or the other and we have no fear or that particular competition,” explained Mandimika.