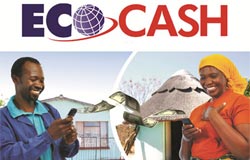 As Econet celebrates the first anniversary of its mobile money product, EcoCash, the company has announced that the service has grown to over 1.7 million registered users. In a press release sent out today, the company says this makes it the second fastest growing mobile money transfer service in the region after M-Pesa.

EcoCash was launched last year on 29 September 2012. Even though growth seems to have slowed down a bit, the product’s subscriber base has grown impressively over the past year. To celebrate the anniversary, Econet has today launched a competition called “EcoCash One Million Dollar, Waya-Waya Promotion” in which EcoCash subscribers qualify just by transacting. Each day for 100 days, Econet will award US $100 to 100 users of EcoCash and at the end of the competition in January 2013 a grand prize of $100,000 will be awarded.  “Waya” is Shona vernacular slang word for ‘a hundred dollars’.

Without qualifying the claim, Econet says in the announcement that this is the biggest cash prizes promotion launched in Zimbabwe. In fact the title of the release is “Econet Wireless Launches Zimbabwe’s Largest Ever Consumer Promotion”. The daily $100 prize to 100 people for 100 days works out to a million dollars given out in total, so the claim may hold true.

The announcement comes just two weeks after Telecel, the third largest mobile operator in Zimbabwe, revealed that it gave up on mobile money, opting instead to focus on it’s core GSM operations. The second largest mobile operator in Zimbabwe, state owned NetOne, also has an MMT product called OneWallet, but its growth has been somewhat slow as the company requires subscribers to swap in their mobile SIMs for higher capacity ones.