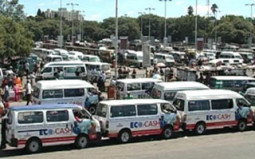 Today, a friend pointed us to a development on the EcoCash for business front. Specifically, in the public transport sector. Apparently Econet is already trialing its mobile payment service in Kombis (local Zim colloquial for public transport minibus). The friend, a student at the University of Zimbabwe says he started noticing the development yesterday.

In his own words:

They have launched transport payments using EcoCash in select areas of town. & they are giving students free money to spend on transport.

But mahwindi andakataura nawo [translated: the touts I spoke to] they are very much against the system. Hanzi takabvuma [they said we agreed] just for the free joining reward. Complications in asking who has transferred and who hasn’t and also busy counting physical money while you are adding money that came virtually so u can’t tell yabva panaani [who has paid]. It will be interesting though, it could be a resistance to change.

We asked “so how do the students get the money?” His response;

They registered at their faculties. $20. It should be to about a thousand students when they gave the announcement

They said this they started this week on select routes. I only heard UZ and Mbare.

I was surprised to find out that everyone in the kombi had an EcoCash account. Then i saw 5 who actually paid. I say that’s an impressive ratio.

The kombi has stickers inside with their merchant number.

Later, via phone, he told us that Econet has an EcoCash agent/Econet staffer in each Kombi that is part of the trial whose job is to explain the concept and help if there are any issues. As well gather feedback we’re guessing.

We contacted Econet for details but they’re of course not ready to speak yet so our emails hasn’t been responded to yet. From some sources however, we’re gathering that the pilot just started and that it’s the final stages of preparation to launch the service. “The latest we will take to launch officially is probably next month” the source said.

Econet launched EcoCash for business in August. Competing mobile money transfer services on the market include ZimSwitch’s and another offered by rival and seco nd largest mobile operator in Zimbabwe, the state owned NetOne. Telecel, the third largest mobile operator in the country, revealed last month that they killed of their mobile money service to focus on direct GSM services.

28 thoughts on “Mobile money for public transport: EcoCash in the Kombi”