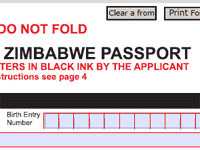 Yesterday, a report in the state run daily The Herald, reported that the Registrar-General Tobaiwa Mudede announced the availability of Zimbabwean passport application forms on his department’s website. Though the website was offline for most of yesterday, the website is up now and the application form can be accessed. The website also has other information to assist visitors to interact with the Registrar General’s department.

In addition, the department has introduced SMS notifications for when applications can collect their processed documents. The applicant’s mobile number is collected on the application form. Mudede says the SMS platform, which he refers to as “a top-of-the-line SMS solution”, will be piloted in the coming days.

The form is basically a protected PDF document with controls that prohibit users from being printed before all its required sections have been filled in. One can download and fill in the form offline. Even though it can be downloaded, Once filled in, the form is submitted at the usual passport offices and, strangely, the applicant is required to pay US $33 for the form on submission.

Strange because, seeing the government doesn’t have to print the forms itself to ‘sell’ them to applicants, is there still enough justification to sell the forms? We think the forms should just be free! We also look forward to more significant developments like allowing the applicants to submit the form online, pay online and only go to the Registrar’s office to have their photo taken and added to the database. That would surely help make the nightmare that the process currently is, go away. The SMS notifications too, if it works very well, is a big deal and will save applicants a significant time and money.

While the looks of the website are nothing to be proud of (the designers among you will be disappointed) the step to take interaction with government online is welcome.

Update: Even though the form can be downloaded and filled offline as indicated above, we have just been notified that this is certainly not the intended method. In fact, the Registrar General says it outright in the Herald story that the form cannot be downloaded:

update: We just posted a related article on the issues the site is having staying up.