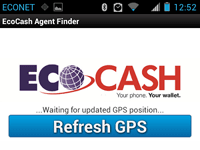 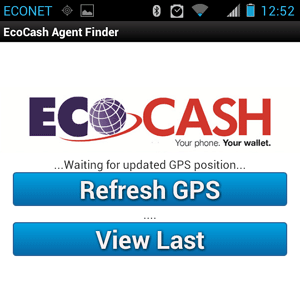 Despite EcoCash being quite expensive to use (especially for the larger amounts) there’s always that time when it’s really the only option. Time of day, your location and the situation’s urgency all conspire to get you to EcoCash someone. And during such times, it always helps to know the nearest agent to rush to. A local programmer, Sam Takunda, has solved the problem. Well, the Android users among us at least.

Takunda has made available an App he had made for himself to find the location of the closest EcoCash agent using his mobile phone. “I always look for agents in a state of real emergency so I thought what the heck, I’m a developer I should do this myself,” he told us after we asked him how he came up with the idea.

The app, which is only available for Android phones, uses the phones GPS to suggest the closest agent. Takunda says the agent location listing is sourced from the Econet website. Takunda is also crowdsourcing more agent location data through the app; Users of the app have the option to add agents that are not already in the apps database.

The app can be downloaded here. It’s in beta so don’t expect everything to be smooth or to work just the way you want.

We last wrote about Takunda in November last year when he came up with an EcoCash internet payments proof of concept.