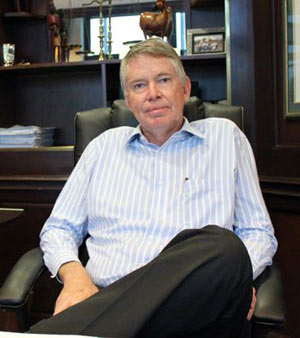 Press releases are usually filled with exaggerated self-praise and sometimes some subdued remarks subtly attacking the competition. Not with today’s press release from Econet Wireless which we posted earlier. The company has fired a salvo at CABS, ZimSwitch and Kevin Terry accusing them of using the Bankers Association of Zimbabwe to fight the EcoCash mobile money service.

The attack from Econet is actually a counter attack. The company is apparently responding to news last week that BAZ is lobbying the Reserve Bank of Zimbabwe “to act against Econet Wireless’s reluctance to open up its mobile banking gateway to allow them to transfer money from clients’ bank accounts straight to the beneficiary mobile number.” The herald report last week goes on to says that only CBZ Bank, TN Bank and FBC Bank have access to the giant mobile phone operator’s mobile banking gateway, as Econet seems to take a cautious approach to partnering all the banks.

“That is simply not true. We have agreements with most of the banks, and we are currently carrying out physical connections with most of them. We as Econet initiated the process, and we are very keen to get it completed, but it cannot be rushed because it involves accessing bank accounts.”

“Right now I am expecting three major banks to go live within 10 days, because we are almost complete.”

“As you know, CABS have been working with ZIMSWITCH to launch a service called Textacash. Since their own customer base is very small compared to the Econet subscriber base of 8 million, they want us to open up our system, so that they can simply spam any of our customers with text messages. We will never allow that because it would not only violate our license, it would be total abuse of customers’ privacy.”

Then, no holds barred;

“He [Kevin Terry] wants to create an impression that this is the position of all banks, but he does not disclose to them that it is his own interest that he is fighting for. If CABS and ZimSwitch want to compete with us, they are free to do so, but they must build a proper system that reaches the rural people in Zimbabwe. They have been there for decades, and never did anything to benefit the masses. This is not about the interests of banks or cell phone companies, it is about providing services to ordinary Zimbabweans,”

And as to how Econet knows all this:

“Our friends in the banking system have told us about his campaigns to try and preserve the status quo in which less than 3% of our people had access to the formal financial system, and where thousands of people had to line up every month for hours just to access their own money, or travel all day just to find a CABS branch. This is not the future.”

In summary, “Hey guys, come fight in the open!”

So far, all this is understandably not easy to comprehend as CABS, ZimSwitch and Terry haven’t offered their side of the story. Well, not officially at least. ZimSwitch is also owned by member banks themselves (including CBZ which was the first to partner Econet ) making it more the harder to understand. We have sought comment from CABS, Kevin Terry and Zimswitch and will post the responses once we get them.